It is official!  My little cousin Ginny is joining our ranks!  I’ve seen her flight information and count on her arriving at JFK on April 2 in plenty of time to join me and Barb as we cue up to board our Iberia flight for Madrid.  How cool is that?

“Just out of the blue?” you ask?  “Just like that?  You send her your itinerary and all of a sudden she’s thinks “maybe I should do that too“?  No, it wasn’t like that at all.  Well, mostly not like that.

Yes, it is true that within days of learning of our departure date, she hustled to the internet to see what flight plans she could come up with.  (Get this: she did so just enough days later that she managed to secure the same Iberia flight for $135 less than what we paid.  But whose counting pennies?!)  Ginny, though, had had the Camino on her radar for years.  Back in January of 2017 she and I were together with our sisters and cousins (“sister cousins” we call ourselves), luxuriating in a week-long “gathering of the flock” in a quiet community near Naples, Florida.  Ginny and I were roommates.

Not for the first time!  Our childhoods were marked by our trips back and forth between Chicago and “the farm” in Minnesota, we city cousins so jealous of the amazing lives our country cousins lived, and they, in turn, envious of ours.  In the same farmhouse where once my mom and Ginny’s dad had frolickked, there was the “girls’ room” and the “boys’ room.”  In the former, one, two or even three of the city cousins would somehow find sleeping space with two, three, or even all four of our girl cousins. It worked. It always worked. For a while, Ginny was the “tagalong.”  Perhaps annoying at times (were you, Ginny?  Most “little sisters” are, yet I don’t remember you being so) but adorable as well.  Even with her eyes closed. 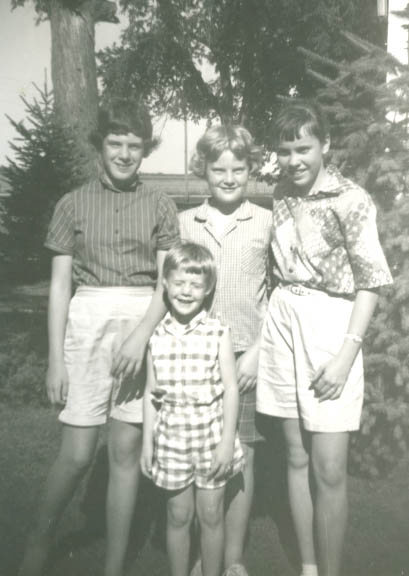 That’s me on the right.  Bets and Pat behind Ginny. 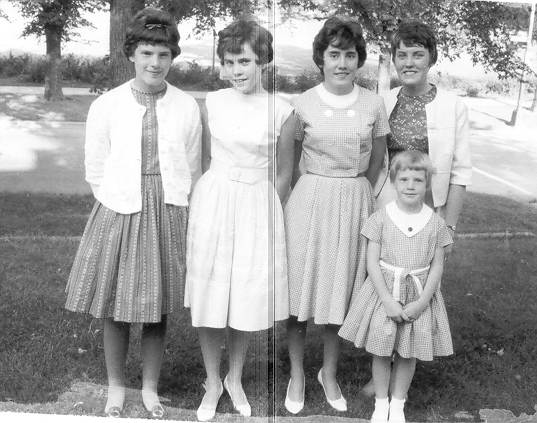 I couldn’t resist.  These old photos are just the best!

Left, at “the farm”: Bets, yours truly, our cousin Jane, my sister Marie, and, of course, “little Ginny” in front 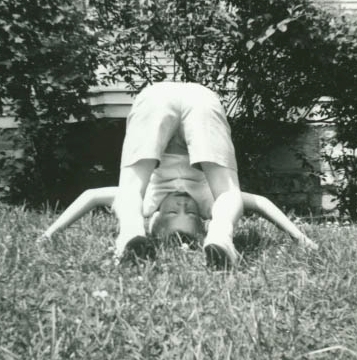 So back to January, 2017, and that shared bedroom in Florida: it was then, exactly two years ago, that I learned of Ginny’s plan to walk the Camino francés in the fall of that year.  We were giddy as we talked about her plans and preparations and mine for more or less the same time period: first European trip my husband and I were taking together, but no where close to Spain.  “If your plans fall through,” Ginny told me, “you’d be more than welcome to join me for any stage of my Camino.”  As it turned out, my trip was a “go”; hers was interrupted by some cranky body parts, perhaps resulting from Ginny’s aggressive hiking in the fall of 2016.

Because a hiker she is!  (And a canoeist, a camper, a runner, and, in general, an “I can do this” kind of person.)  When the fates are on our side–determination, hard work, and following the doctor’s orders help as well–those stubborn body parts heal.  Fortunately that has been the case with Ginny.  (Don’t we all keep our fingers constantly crossed in that regard?  “Knock on wood” and all that….)  The long and the short of it is that by August of 2018 when Ken and I had the privilege of visiting Ginny and Tom in their cozy “cottage” north of Duluth, Ginny was ready to get back into the hiking.  Together we hit a beautiful and not-too-difficult section of the Superior Hiking Trail, one that Ginny had not completed before.  You see, back in 2016 she set the goal of hiking every one of the 310 miles of this challenging, gorgeous footpath.  The trail (mostly) overlooks Lake Superior, extending from somewhere just south of Duluth to the Canadian border.  Our trek on that hot-for-the-North-Shore day added about 6 miles to her log and brought her, if I recall correctly, to a total of 260 miles or so of the trail.

And a seed was planted.  No, I take that back.  It was planted, deep in a secret corner, when I alerted Ginny, back in late spring, that I was sure wanting to imitate my new friend Virginia and head to Spain.  How could I not direct cousin “Virginia” to the other Virginia’s Facebook page where fabulous pictures and some commentary were posted every day?  So yes, the seed had been planted earlier, but I think our August hike served as fertilizer for that seed.  It received further sunshine and encouragement a few months later when nine of us girl cousins (“sister cousins”) gathered for a reunion. It prodded and poked and “nagged” and germinated and, in spite of the North Shore’s cold December, it sprung from the earth in the form of a text from Ginny sent on December 4:

… could I be so bold as to ask if you’d consider a Cuz on the Camino at the same time [as you]?

After receiving my very positive and enthusiastic response, she texted the following:

… I’m overwhelmed with joy and you know how much I want to make this pilgrimage!  I’m not certain why or what this journey may have in store for me, but I am hoping for some insight about….  It is going on 7 yrs. since I first learned of the Camino de Santiago and it has been a burning passion that has been squelched by injuries and finance-but that makes me all the more passionate after wading through setbacks and hardships to reach this goal.  I feel like I have already been on my own pilgrimage to get this far.  That said, it is going to take some true, focused commitment to launch me on this journey.

It was not a “yes, I’m going” but a “wow, you’ll have me?  I gotta see if I can work this out” kind of response.  And hard as it was, I left Ginny alone to do that work.  And work she has!  In more ways than you can imagine.  Between that December 4th exchange and the purchase of our plane tickets, Ginny’s Camino seed grew and grew.  And bloomed.  Ginny will be a key player in our Camino bouquet.

So yes, my little cousin.  The youngest of the 19 first cousins that comprise the family tree descending from James and Agnes.  As the photos above will attest, at one time the five years of age separating us were pretty huge; now, however, they are totally insignificant.  Except for this: Ginny has a big birthday coming up.  Uncle Sam will be responsible for her health care for exactly one full day before he gets a six-week hiatus when she leaves the country.  Lucky guy!  But Ginny gets to celebrate that big birthday during her second week in Spain.  Lucky her!  Barb and I get to celebrate with her.  Luck all around! 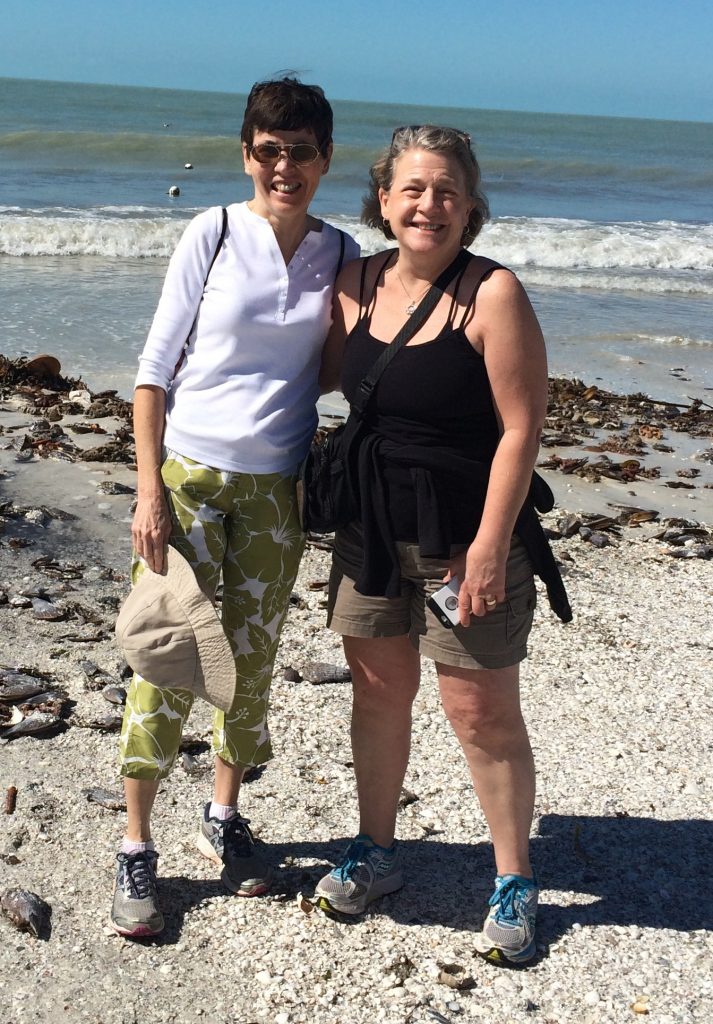 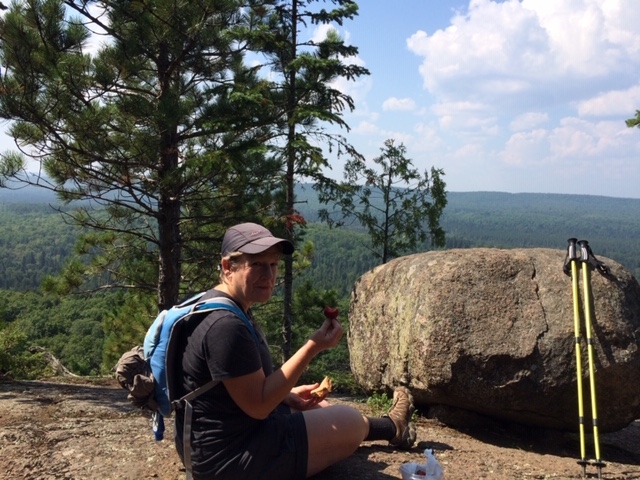 Ginny taking a lunch break on the gorgeous Superior Hiking Trail, August 2018.  I ate, too, but at this moment I was busy snapping this photo of her.

Stay tuned for photos of us together on the Camino!