Are we there yet? (Wait a minute: where are we going?) 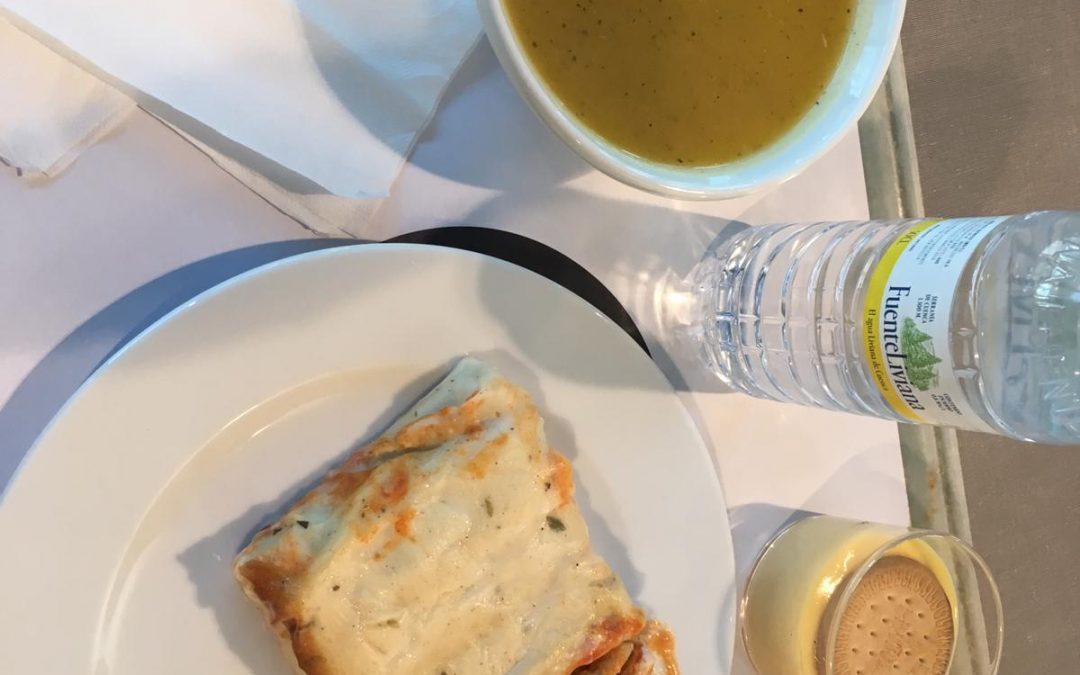 Monday, May 13: the update you’ve been waiting for

I know, I know. I’ve kept you in suspense. Let’s put an end to that with this report.

How about this for good news: when I left the hospital today, Ginny got “real food” on her dinner tray this evening: broth and fruit juice! And earlier in the day: café con leche. So little by little, from gauze pads dipped in water to water from a straw and now, the “gourmet meal” I’ve just described, everything is going in the right direction.

And this: not only is she walking all the wings of the 4th floor, but she’s now doing it without toting the IV/saline solution cart with her. She even came outside in her glamorous hospital gown to see me off on the bus to downtown Santiago.

Still, the doctors here seem to err on the side of caution, so it seems she’s not likely to be heading for Madrid on Thursday evening and back home on Friday, as per her initial reservations. Might be delayed by a couple of days.

But when she finally does return home: it’ll be with her daughter Colleen and her sister Pat who are coming to “fetch” her. They are probably in the air as I write this. How’s that for love?

Meanwhile, I’m making a mess of life in the big city (the population is said to be just under 100,000, but it seems much bigger to me). So far I have managed to

I’ll just say that it was kind of weird to arrive in Santiago the “wrong way.” Hard to feel celebratory when I finally was in the squares (yes, plural) surrounding the cathedral. A cathedral which, I confess, I have yet to enter.

Though my initial plan was to return to the “village” of Morgade, 101.something kilometers from Santiago, to continue my trek towards the tomb of the Apostle in the “right way,” I am now giving serious thought to a different plan.

I’m thinking that instead of taking two busses to get back to the area where I left the Camino, I might just… go to Finisterre, the “end of the world.” This route to the coast would be considerably less busy that the last 100 kilometers of the Camino Francés and I’ve been told that the scenery is really spectacular. It might just be a more fulfilling way to end my pilgrimage.

As it stands now, tomorrow will be a day of tying up loose ends, and then, one direction or another, I’ll head out of Santiago on Wednesday morning, with plans to return no later than the evening of May 21 so that I’m well situated for my scheduled flight to Barcelona on May 22.

There are still two days from last week that I have not written up yet. With luck, those posts will be coming. After all, they have been given titles already, and the titles are feeling very lonely.

Ginny and I have had lots of visiting time for the last three days. We’ve swapped stories back and forth about our adventures while apart and have recollected the first half of the trip, spent together. Laughter and tears. Precious memories. It has been a Camino that has surprised us on many levels! Oh, believe that much!

And remember: we both made it to Santiago. One in an ambulance, one in a bus, but we got here. We chuckle to think back to how Barb didn’t really care if she got her “Compostela” (for completion of the route, for doing the final 100 kilometers), and, by golly, it looks like she may be the only one of us to actually get it. We FaceTimed Barb tonight before I left the hospital and we all agree: what an experience!

Thanks for your support and for your kind and loving inquiries into Ginny’s health. She is one tough cookie, no doubt about it!