Gems in the (urban) jungle

The original title of this post, in draft mode, was “Training: use of technology and time management.” I know, right? Boring! But the truth of the matter is, I haven’t practiced creating a post using the technology I’ll have with me in Spain since September. (I wrote about that experience–in very brief fashion–here.) Since then, I’ve managed to roam and ramble, each post, seemingly, at greater length, editing, elaborating, editing, pruning–admittedly, seldom!–editing some more. No can do while I’m on the Camino.

This, then, is my attempt to write something succinct and more in keeping with what might be possible when I’m traveling. I’ve set a timer for 45 minutes and by the time it goes off, I’d better have sent this post out to the world. No frills, no fanfare, just the basics.

I want to comment on the highlights of a couple of walks I completed this past week. The first was a solo hike, and, at 16 miles, the longest of my entire life. The second logged in at 7 miles, a distance that might have seemed monumental many months ago, but which now seems more like a walk around the block with a bit extra thrown in for good measure. The second was a more social walk as it involved my Camino mate Barb and a restaurant stop mid-way. And sunshine rather than the snow flurries of the earlier outing.

What these two excursions had in common is that they took place within city limits, though neither involved running any errands or making any purchases (other than the lunch, and as it turned out, my lunch entree came complete with a few pieces of broken pottery which, fortunately, my teeth noticed before they–the shards–made it down the hatch. Result: my lunch was gratis.)

(I know what you are thinking: “elaboration” runs in my veins and there is no way I’m going to say anything of consequence before the timer rings and I need to post this. I’m going to try to prove you wrong.)

So what do I really want my readers–do I have any?–to know about the cityscapes through which I passed and my personal experiences while passing through them? 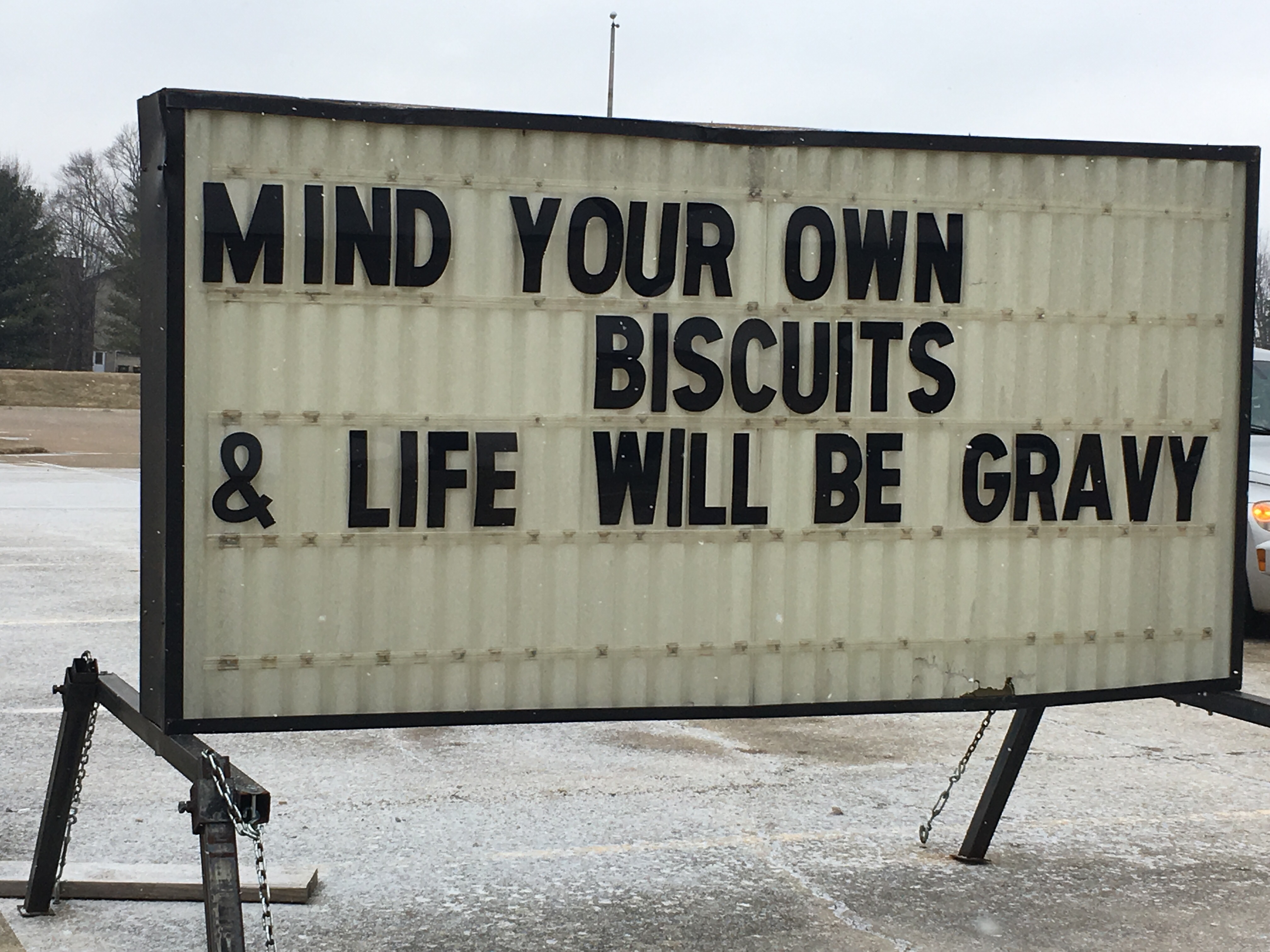 I mean, really, gives one a lot to think about, doesn’t it? And I wasn’t even at the half-way point of my 16-miler, so I had plenty of time to ponder the aphorism. (Conclusion: as I walked along calling to mind this person and that, each with his or her own set of problems and challenges, joys and heartaches, I suppose that I wasn’t minding my own “biscuits” at all. I think I’m more attuned to the philosophy that “No man is an island,” that we are all part of a greater community, a larger family, and that we can help each other tend our “biscuits” and perhaps, together, prevent them from burning. If that kind of “nosiness” keeps life from being “gravy,” maybe that gravy isn’t healthy in the first place…. That said, there’s more than one way to mind a biscuit, and some ways are definitely more acceptable than others.

Okay, so my timer just rang… and no posting because I have two more “sightings” to share with you, one from each of the two walks.

I mentioned stopping in a nursing home to use the facilities. In looking for a way out–the door I entered requiring a code in order to exit–I came upon a room labeled “relaxation room.” The door was open and I couldn’t resist. Oh, if only my friend Pat had such a room where she currently resides. If only we all did! Away from the chaos and distractions of daily life, away from “stuff,” from noise, from the need to “do” and offered, instead, the luxury of just “being.” You’ll see from the photo: comfortable chairs, no bric-a-bracs, low lighting, and a total of three lamp-type sculptures with slowly changing colors. Do believe me: I wanted to sit for a spell! 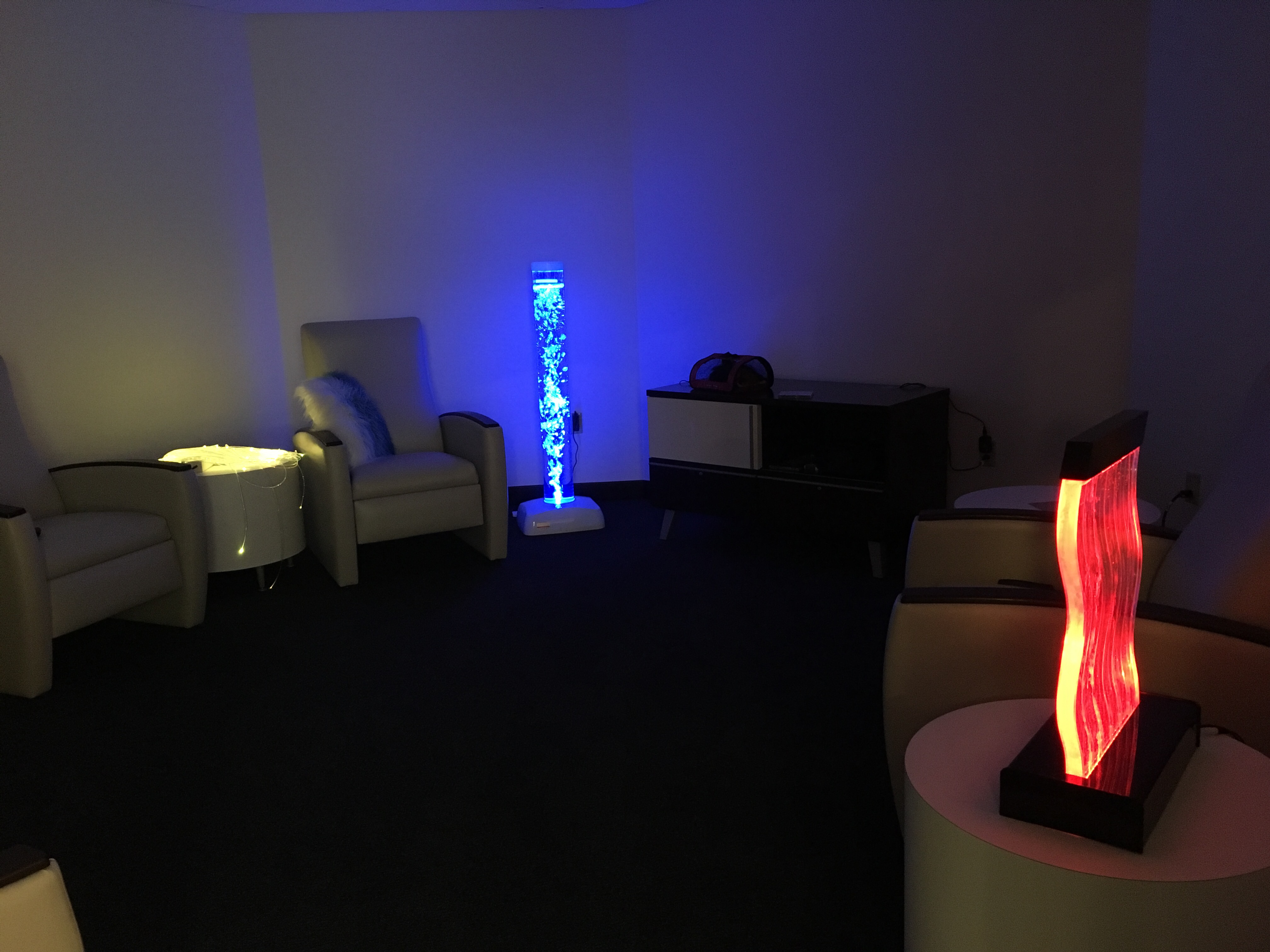 The next two pictures are of a tree. It might look like it is out in the forest, but I assure you, it’s smack-dab in the middle of the Sycamore Knolls neighborhood; the photos were taken from the sidewalk that butts up to the tree. Now I am used to coming upon the Little Free Libraries as I walk Bloomington’s neighborhoods, and I delight in the signage protesting hatred and welcoming diversity in our neighborhoods, but to my knowledge this is the first time I’ve seen poems thumbtacked on trees for the pleasure of passers-by. 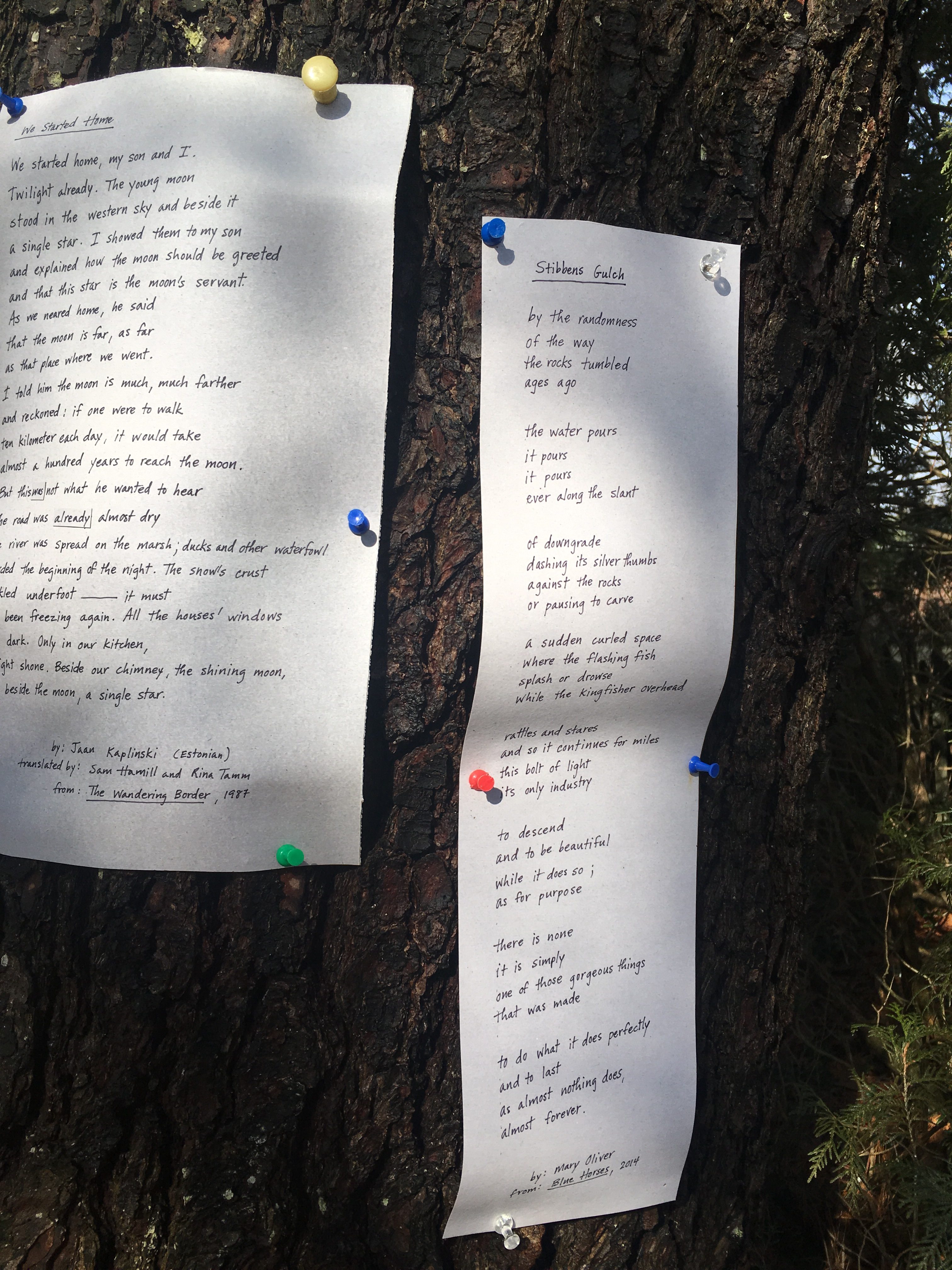 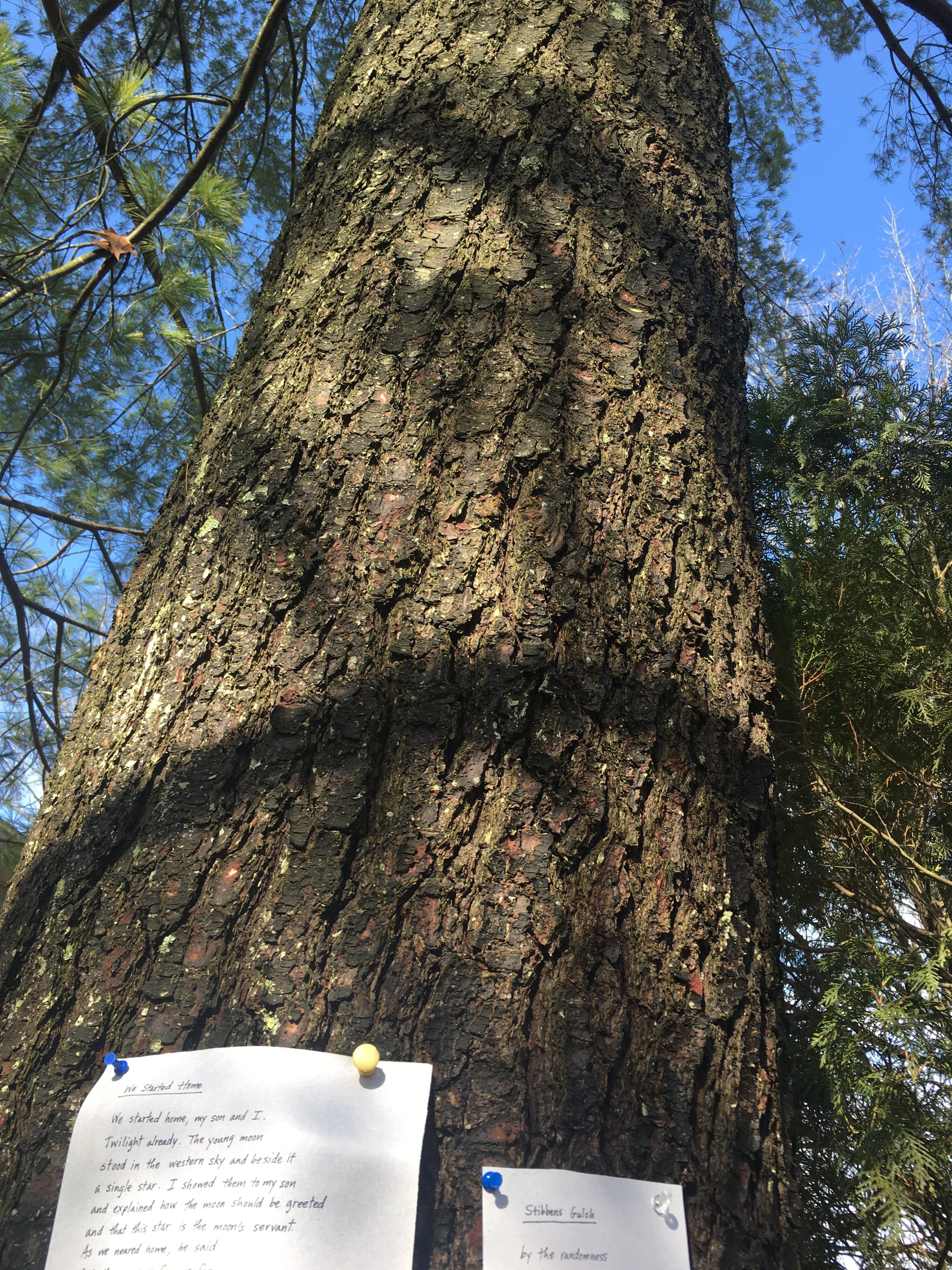 Because I know you are wondering, and I don’t think this page is going to let you expand the photos: the poem on the left is an English translation of Estonia poet Jaan Kaplinski’s “We Started Home,” from his 1987 collection, The Wandering Border. Nature reigns supreme as father and son notice the moon, a bright star, snow, a marsh, a river, and the chimney of home on a winter’s evening.

On the right is a poem by Mary Oliver, the beloved poet who left us just a bit over a month ago. In “Stebbins Gulch” from Blue Horses (2014), Oliver evokes water descending rapidly down a gulch. She observes the rocks over which it washes, the fish who splash, and the kingfisher who watches them with more than a little interest. Of the rushing water and the gulch itself the poet comments:

to descend
and to be beautiful
while it does so;
as for purpose

to do what it does perfectly
and to last

as almost nothing does
almost forever.

Ah, that we humans could figure out what we were made to do, and then do it, perfectly, beautifully, almost forever…. Now there is food for thought for even the longest of walks.

As for this post, it is shorter than most of mine. You’ll give me that, won’t you? I’m not there yet in terms of brevity and concision, but this was, after all, a “training” exercise, and you know what they say about practice making perfect. With effort and practice, aided by lack of time to be expansive, there’s hope that my missives from Spain will not, like Stebbins Gulch, “last/ as almost nothing does/ almost forever.”