The Indiana woods in winter strike me as neither dark nor deep, but yes, they are undeniably lovely.  They welcome and allure.  They invite going just a bit further, one more climb up to a ridge to catch another vista, one more descent into a peaceful valley, one more leap over a partially frozen creek.  Free of their leaves, the trees command attention for the diversity of their trunks and branches.  What a treat it has been to rediscover winter hiking and to visit our local forests on a regular basis.

Until the rains came.  And the warmer weather.  Thus, until the temperature plunges once again (and for the first time in my memory that is just what I’m hoping for!), MUD rules the day.  Mud and flowing creeks too wide to jump and too deep to be comfortably waded.

What’s a Camino trainee to do, then, but settle for some urban hiking?  And so Barb and I did just that the other day.  Oh, we’re both walkers, that goes without saying.  Daily errands, plus, for Barb, dog walking, can rather easily give us five miles of pavement.  An “intentional” walk around town, maybe up to seven miles.  Been there, done that.  But an “urban hike“–which I choose to define as 10 miles or more–is something that we had not hitherto undertaken.

About time, really.  For the truth of the matter is that our Camino journey will, for better or for worse, involve a fair amount of pavement pounding to balance out the more rural, pastoral portions of the trek.  We will, on occasion, be skirting airports, traversing major cities, making our way around industrial areas, and walking just beside rather heavily-trafficked roads.  I do not expect to be enamored of those sections of the Camino, but I will not be shocked to come upon them.  I’ve been warned.

This past Tuesday was a perfect day to test out our city legs as well as our foul-and/or-changing-weather apparel.  Better to find out stateside just how serviceable our rain gear would be.  Not that we had the most typical weather pattern to deal with.  We expect, in Spain, to be experiencing days in which the temperature is most likely to rise during the course of our walking; our course of action will be to shed clothing as the day progresses.  That was not to be the case for us on the particular day about which I write.  We dressed for the unusual-for-a-February-morning 50 degrees, knowing that 1) rain was expected and 2) by the time we finished the winds would have picked up and the temperature would have fallen to the upper 30s.  If anything, we would be adding clothing as our hike progressed. 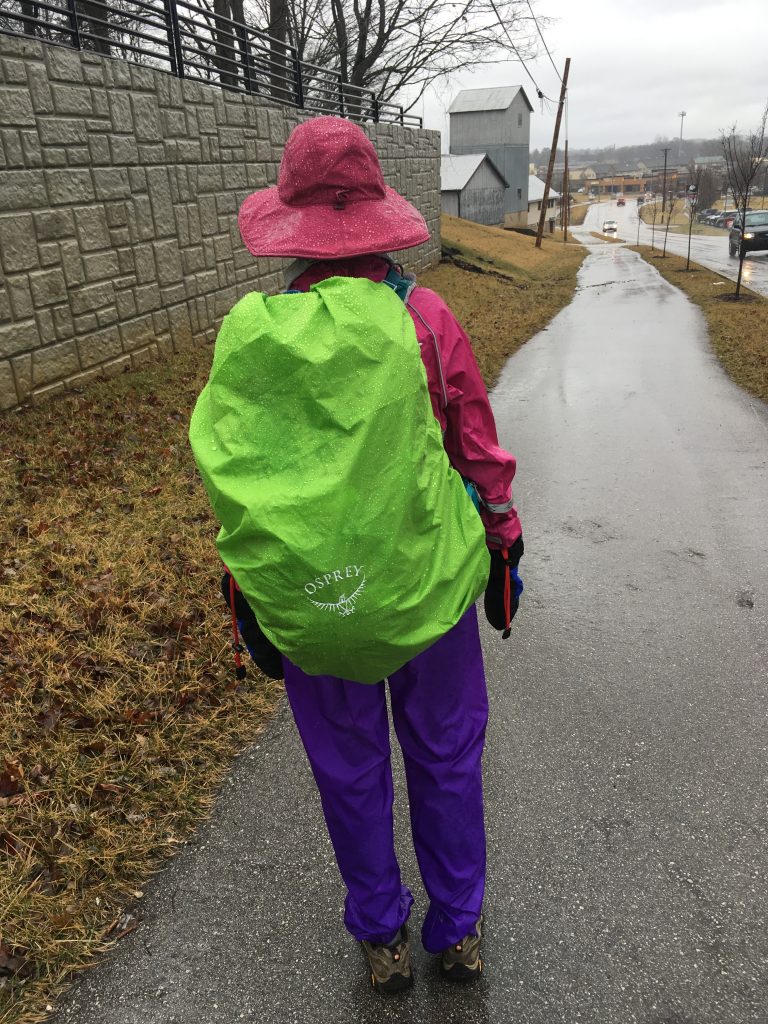 “Raindrops keep falling on my head / But that doesn’t mean my eyes will soon be turning red / Crying’s not for me, / ’cause, I’m never gonna stop the rain by complaining / Because I’m free / Nothing’s worrying me” … unless maybe my feet….

Our conversation for the ensuing four hours was neither of a intellectual nor a philosophical nature.  No.  Mostly we talked about our equipment and how it was faring, of what was in our packs, of a few more items we had ordered or were thinking about ordering, along with the whys and the wherefores of each thing.  You would no doubt have been bored.  We couldn’t have been more engaged!  Our gear talk was interrupted occasionally by the need to consider our route and ponder whether such-and-such a street was going to have a suitable sidewalk.  We were, after all, on routes that we knew as drivers or cyclists rather than as walkers.

Both Barb and I saw this hike as an experiment.  We branded it “successful.”  We were, I must admit, rather tickled with ourselves for being of one mind, for thinking that we needed to get out in some rather adverse conditions.  And equally tickled that we had made good gear choices for the day, a day we felt might rather closely resemble some we were likely to experience in Spain.

But as an experiment goes, it was not very scientific in nature.  Not enough variables.  No control group.  Too short-lived.  So in the end, inconclusive.  For example, what if the sun had come out?  Would our rain gear have been warm, having us soaked with our own sweat in no time?  And what if the skies had really opened up, if instead of drizzle we had had the flood-like conditions of a week ago that closed many roads and caused schools to be dismissed early?  What then?  Any chance our rain gear would have been able to fulfill its part of the bargain?  Still an unknown factor.

Yours truly’s toes were not happy campers upon returning home.  Oh, they managed to walk another two or three miles–those pesky errands!–before the day was over, but they forced their master to wonder: was it the hiking boots or the socks or the weight in the pack or mutiny against all this training or the beginning of some kind of breakdown?  Yikes!  Each foot has 26 bones, 33 joints, and more than a hundred muscles, tendons, and ligaments; that’s a lot of stuff that could rebel at any given mile!  (It’s been two days.  Yes, we’re going to give those toes and the feet to which they’re attached another chance to show their mettle today….)

We’ll continue our experimenting.  With sun (hopefully!).  With rain (inevitably).  With mud (sloppily).  Even with less-than-happy body parts.  With good humor and gratitude and hope and resilience.  We’ll have all that and more on the Camino.  We’ve had, and will continue to have, all that and more in Life.  Even if practice doesn’t make perfect, it still makes a lot of sense.

*Just had to share the (slightly-edited-by-me) definition of “jay walking” as found online at urbandictionary.com:

When you cross the street through the middle and not at the intersections were [sic] you are supposed to. They call it Jay walking, because back in the 1900s in New York people (New Yorkers) would call tourist jays, and since jays were really impressed by all of the tall buildings they would walk up to the middle of the street to see how tall they were, therefore the word Jaywalking emerged.

I could be concerned about the fact that the Merriam-Webster online dictionary gives a totally different account of the origins of the word “jaywalking”, along with historical data (see it here; you might be surprised!).  I could also be concerned that the person who submitted the Urban Dictionary definition goes by the name of Cacahead305 and that the definitions in that dictionary allow viewers to give definitions a thumbs up or a thumbs down.  But I’m not.  In this day of fake news, why should we object to a fake definition?  It seems only appropriate that an article about an “urban hike” should get some back-up from an “urban dictionary.”  If only I could come up with an urban legend to round out the package….