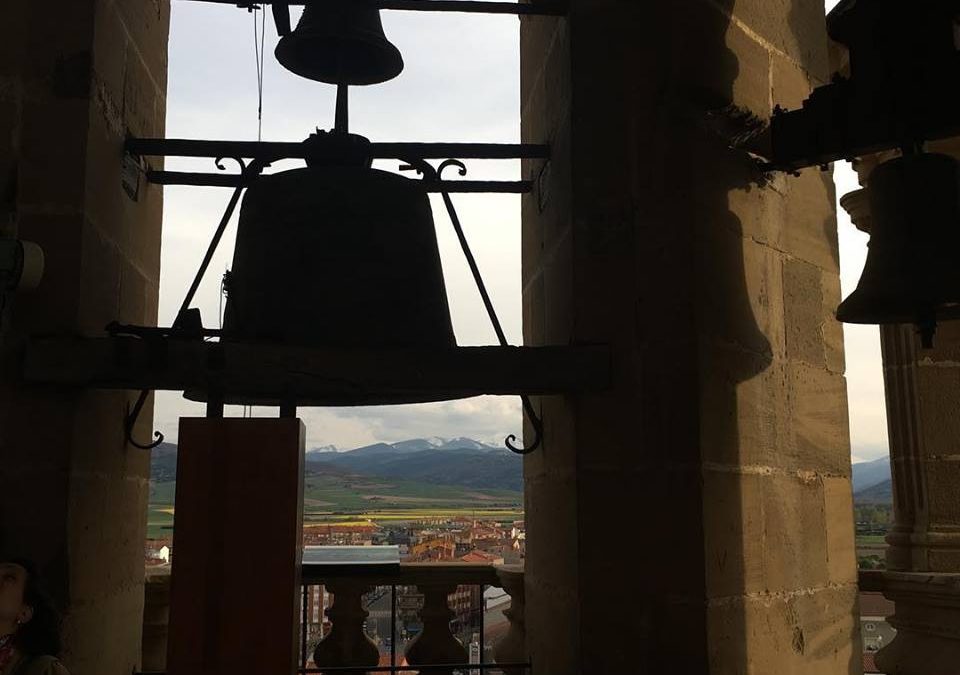 Once I begin shortcuts, whether on this blog or on the trail, I will be on a slippery slope, won’t I? But really, I’ve been on slippery slopes and hills and rocks and cobblestone streets for 10 days now, so what’s another slip? What I’m leading up to: this is going to be short tonight. Yours truly is thinking that bed would be awfully nice, the sooner, the better. Besides, I did something much harder than walking 10 miles today. Several things, actually. One of them: preparing tonight’s dinner in the hostel’s kitchen where it took me a good five minutes and the help of two Russians and one non-English speaking woman of unknown origin to figure out how to turn the burners on. The other hard thing was carrying on a conversation with a woman we invited to share that dinner with us who spoke not a word of Spanish or English; there was nothing to it but to muddle my way through in French. Two years ago, before our Quebec trip, my French was passable. But now, after 10 days of bringing out my Spanish, that French was pretty darn pathetic. (Nevertheless, it brought forth abundant mercis and much affection from the hungry woman… a woman whose name, I’m afraid, I never even asked…)

Ginny and I were pretty proud of ourselves with our grocery store purchases. We were lucky to find a store open on this Palm Sunday, but in this town of 6,600 people, I guess there is a need. We’ve been in tiny stores before, but this was a good-sized store (don’t think Kroger, but… well, a good size). I messed up with the vegetables. When the cashier picked up our bag of strawberries she disappeared briefly, and came back with a price tag on them. Then she found the carrots and tomato and handed them to me. “Get a price for them. You’ll see. Just follow the instructions.” How hard can this be, I thought. I’ll look for a scale. Found it. Read the directions which basically said to put the items on the scale and push a red button. Voilà. A label spit out of the machine at me. Wonder how the machine knew how much to charge just by weighing the item, I thought. Pleased with having followed the directions, I returned to the cashier. “No, that’s the wrong thing,” she replied abruptly. (Really, would you want to deal with dumb foreigners when you are working on a Sunday while the rest of the city is enjoying tapas and wine and you will be doing the same as soon as the market closes in ten more minutes? Come on!). I followed her back to the produce section and saw to my chagrin that there were two scales. I had used the one for hard candy, all of which was the same price/kilo. There was a second scale where you located the picture of your item, selected it, etc., etc. Oh well!)

Oh, but you want to know what we did today, don’t you? We walked! Prayed that our bodies would carry us. Wondered where Jesus and his disciples slept when they traveled from town to town, where they did their laundry, how much they carried on their backs. Realized how easy we have it, even though it (the walking, being pilgrims) is hard. Realized how easy we have it in comparison with most of the world who face harder challenges, challenges that they didn’t choose! Thought about family and friends. Our love for them. Their love for us. Fought to get WiFi when we arrived at our hostel. (Forgot that when things don’t work, “reboot.” Why am I so slow to learn that?)

Once dinner was prepared, dishes done, food stored in the hostel’s refrigerator for consumption later in the evening, I headed out to see the sights, sights I would love to tell you about (like climbing the bell tower and being less than 7 feet from the huge bells when they tolled 7:30 pm–I took a video, but Instagram wasn’t keen on loading it, so your ears can count themselves lucky–….)  Yes, I’d love to tell you the fascinating story of Saint Dominic of the Road (patron saint of pilgrims) and about why, in the cathedral–which is amazing!–there is a hen and a rooster in a sacred spot for all to see…. but the lights are going to be shut off in less than six minutes and I don’t have my flashlight with me. And I’m tired. And what you really want to know is: “how are you and Ginny doing?” “And how is Barb?”

To the latter question I’ll tell you: she is amazing, three days ahead of us now. She must be averaging about 20 miles/day! Not that I have time to do the math, but she is in Burgos tonight.

My feet are doing better than Ginny’s right knee. So if you have extra time for prayers and thoughts and healing wishes, send them her way. She may be living this Passion Week in a more intense way than ever. Or not. That’s the option we like best!

I’ve put pictures from yesterday and today on Instagram/Facebook. I tried to include one below, but… it was too slow. Yikes, now it’s 10:00. Hope I can find my bed AND my bunk. Another top one…. Nite all!