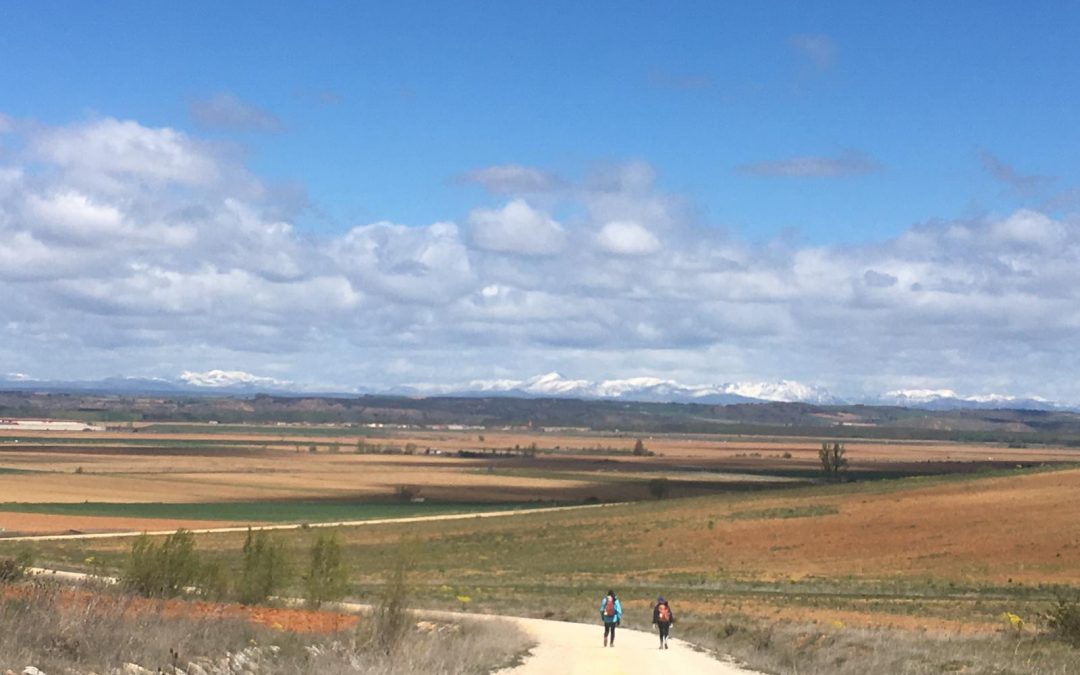 You have to admire those town names, don’t you? I mean, are they not pure Castilian names?!

And, had you been on the road with me, you would certainly have admired the scenery! Oh, my gosh! You’d have to be totally immune to beauty to not have uttered, as I did countless times, “Oh, my God!”

She walked. She arrived. In one piece, which means, does it not, that “she conquered”? End of story, at least the short version of it. Go back to what you were doing, or, stay tuned to help me “name that tune”…. oh, I mean: “name that post.”

(Don’t worry, there won’t really be that many: there were no stops along the way [nowhere to stop], very few people with whom to talk, and too much wind to have any hope of hearing what anyone said. So this will be shorter, if not sweeter, than most)

The day called for distracting oneself from the reality of the wind.  One such distraction was to come up with possible titles for today’s post.  Here are some of the ones that occurred to me:

But I’m actually getting ahead of myself, so, if you can bear with me (I know, I promised few details, but then I start writing and the floodgates open…).

Shortly before lights out last night, I told my three roommates to alert me if the clicking of my keyboard bothered them at all. I was wanting to get yesterday’s post done (didn’t happen…). Alan said: “It won’t bother me. I’m going to turn in now, but I wear ear plugs every night. I don’t think I snore. My wife says I don’t.” Within minutes his snoring began. Loud. Constant. For the first time on this journey, I got out my ear plugs. I can only conclude that Alan’s wife is a martyr or that she lives several houses away from him. But hey, we survived. The ear plugs were uncomfortable and didn’t block everything, but they helped. By 6:30 am, Alan–who, I trust, had an excellent sleep–was packed up and out the door, leaving Victoria and Pia and me some privacy for getting dressed and rolling our eyes about Alan’s opinion regarding his sleep habits.

When I, too, was packed up, I chose to head over to the municipal albergue just down the street to see if I might join Kelly and María at their dining table. (My place had a “breakfast menu” and didn’t encourage pilgrims to bring their own food into the dining room. I had a hard-boiled egg, an orange, and some pastries that I didn’t want to tote around with me.) It was fun to see the girls again, and their hospitalero welcomed me in and brought three glasses to the table, along with fresh-made coffee and a pan of heated milk. (The latter was my choice, and, having discovered yesterday just how good warm milk can be with a spoonful of sugar, I indulged again.). So yes, the hospitalero was both friendly and kind, but he made it clear that we were to eat our breakfast quickly–“celulares, no; ahora no” [“no cell phones now”], he chastised. “You need to be on your way by 8:00. I have to mop, clean up the kitchen, remake the beds, have time for a paseo [a stroll about town”] before the next group starts to arrive. Kelly looked longingly at the wood stove, but no, no fire was going to be started up until afternoon. We took the “hint,” and set out, Kelly and Maria to bring their packs to my albergue where they would be picked up and brought forward, and me: heading down what would be a very quiet road. (Perhaps you recall: we took the alternate, scenic route; most pilgrims went the most direct way, along the highway.)

What one noticed from the get-go this morning: the sunshine! At first, not a cloud in sight. Rejoicing at this novelty, I was able to once again have my pink bandanna on the outside of my pack within easy reach. And the air was still chilly enough (a “feels-like-32-even-if-it’-actually-a-37-degree morning) to employ the oversized hanky frequently for my leaky nose.

The second thing to notice: that the sun was sparkling on the snow-topped mountains off to my left. I can’t tell you how many time I stopped to retrieve my camera and take both still photos and videos of the impossibly-distant mountain range. Had a perfect view of it and if my neck is sore tomorrow, it will be from spending so much time looking off to my right. More and more mountains came into view as some clouds on the horizon lifted (though enough clouds remained to make the view interesting). It was impossible not to commence with some “praise singing”; it just followed naturally. Again, I hit on a familiar melody that lent itself to countless verses, each with a word or two changed.

The third thing to notice: as that first half hour turned into a second half hour, the wind decided to show its strength. If it could have made its point with just a gust here and a gust there, fine! But no, this wind had something to prove and blew the entire day. Ruthless! Relentless! Non-stop! (Got my point?). Demoralizing! I recalled how in an early stage on the Camino someone passed me and said, “Boy, I’d sure like to be as slight as you–just for the Camino–when trekking up these hills!” I got to thinking how I’d like to have a lot more bulk–just for the Camino on a windy day–so I wouldn’t be blown to Kingdom Come!

And then I noticed the fourth thing: the stones. We were, after all, on the old “Roman Road”; originally built 2000 years ago to get treasures back to Rome, to get pilgrims hither and yon, to conquer the peninsula, to reconquer it. Wouldn’t you think that, with all those centuries of use, the stones would have been pounded down into the earth? Wouldn’t be so loose, so ready to make my feet twist this way and that? Think all you like, but know that it wasn’t so. Tough walking. Had someone brought truckloads of new stones to make the road more “scenic’ and “quaint”? Curse them!

But it was clear that kind of thinking would get me nowhere. Instead, I called forth the song I had “invented” two days ago, the one that redeemed my afternoon and made it memorable. That one and another of the same ilk that I worked on. Like the iconic “spoonful of sugar,” the singing made the medicine of the trail go down so much better.

So did lunch. I spied a picnic table just as my roommate from last night, Victoria, arrived on the scene. She and I got our prepared lunches out of our packs and realized that if I shared my tomato with her and she shared her avocado with me, our sandwiches would be healthier, more colorful, and tastier. Said and done. We stayed at the table a long time, finding out that we had a lot in common (a love for bargains found at Goodwill, interest in long-distance bicycling, and our determination to do everything we could possibly do, always and everywhere, to stay warm). Heading onward was a lot easier from that point forward. Not easy, but easier. Maybe I had just been hungry.

We resumed our solo walks after lunch. As I told Victoria, as bad as my hearing is and as loud as the wind was, it would be an exercise in frustration to walk together. In general, at this point on the Camino, people are mostly walking at their own rhythm, mostly alone. Seems to work best. Sharing is often best done once we have settled into the hostels.

And soon I was settled in mine, the municipal, a bargain at 5 euros. The large group of Asians we encountered a few days ago at the convent are here. Lots of them. With big suitcases! I noticed the tag on several of the bags calling it a “Catholic tour.” Their language skills seem to be limited to …. whatever their native tongue is, so I haven’t learned much about them. The are cooking some pretty good-smelling food though.When I entered the patio of the albergue, there was a big group gathered, one person playing the guitar, some bongos going, many voices. English-language songs. Folk songs. Music from the 60s, mostly (although, what do I know?). I was in need of a shower, but could hear the singing from the shower and I was really enjoying it. I happily found a seat in the sun, post-shower, and enjoyed at least another 40 minutes before the concert was over. So nice!

It only seemed right to express my enjoyment too the guitarist/soloist. Besides, I wanted to hear him speak so as to determine if he was Irish or British. (I was recalling my month in Santander, summer of ’67, when about a dozen Irish seminarians were living in the same dormitory as the group with which I had come to Spain. Every night it was the same thing: gathering in the patio and listening to them play and sing. Was this experience today a kind of book-end to that earlier one?)

So I went up to the fellow, thanked him, and asked: “Have we already met?” “Met? Why we slept together last night,” he responded! “Oh, maybe I should have said that a bit differently: ‘we shared a room last night.’” It was Alan. Alan the snorer. Alan with whom I had stepped out for a trip to the market yesterday afternoon, with whom I had had a cup of coffee (well, “steamed milk” to be precise; he had coffee). I’m bad with both names and faces! It was a funny situation. Embarrassing but humorous, too. I guess Ken need not worry that I am giving undue attention to other men!

And that brings you up to date on today’s details. I’ve been sitting in the patio doing this write-up and the sun is no longer shining on me. Even with my winter coat back on, it is clearly time to head indoors, maybe put the long underwear back on, and then start thinking about where I’ll have dinner. Who knows, this post may get a PS before I sent it off to you.

But the title? That’s for you to come up with. Remember? We were playing “Name that Post!”