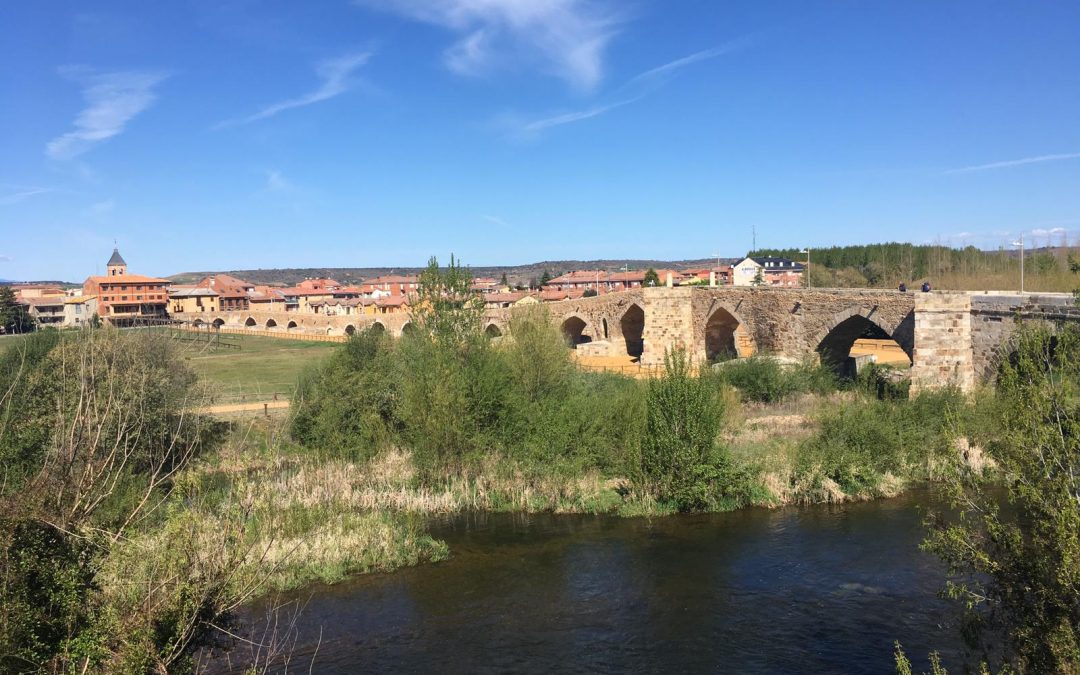 I have some catching up to do, as Saturday’s post is still lingering in my head instead of on the page. And today’s, as well. My plan is to attack them both. Thought I’d share where this siege is taking place. Some of you will be jealous and some will say: “better you than me.” Which are you?

I am in the courtyard of the parochial albergue of this small town. I know it is small because I missed a yellow arrow and walked to the end of the town where there were arrows pointing in the direction from which I had come. Apparently I am not the first one to miss the turn!

Here’s what I can tell you about the town. It seems it’s too small for the guidebook to bother giving its population. It doesn’t have a grocery store. I’d say it doesn’t really have any stores. Probably very few people and they would all be elderly. My guess, anyway. I arrived at siesta time and so, obviously, the sidewalks were rolled up. However, I’ve seen no reason to return to the post-siesta streets as the patio in which I am sitting is delightful.

Takeshi (male), my Japanese roommate, is sleeping on a mat which he has spread out on the grass. Sandrina, a Romanian woman, is out here as well, catching up on her email and her journaling. Charlie, a third roommate, from England, left us a while ago after doing a bit of serenading on his guitar. Also joining us is an English-speaker (American?) who has shared his peanuts but not yet his name. He is staying in the albergue across the street but has found the innkeeper rude and so he doesn’t want to spend any money there. He will be joining my roommates and me for the pilgrim dinner here at 6:30. For now, he is enjoying a beer with his peanuts and cursing his email which doesn’t seem to be working. (Frankly, I preferred Charlie’s strumming on the guitar, but this guy’s ok, I think.  I’ve certainly been know to let four-letter words fly when my email or internet isn’t cooperating….)

When I saw how tiny the town was and how lacking in services, I contemplated going against my better thinking, heading on down the trail–I mean up the trail, for there are hills and more “páramo” awaiting us. I did not want to go to the next big town, though, and the town 10 kilometers away has only one small hostel and I couldn’t find out about availability (they wouldn’t answer the phone). I didn’t want to take the chance, so I was forced to follow my better judgment and stop. There is a reason for my being here (and it isn’t because the bedroom is toasty warm, that’s for sure).

I was greeted at this albergue by two young Brazilian volunteers, emphasis on the word “young.” One was busy plucking facial hairs that didn’t suit her; the other occupied herself with her cell phone (at least assuring me that the Wifi worked on the patio). Typical teenagers (sorry, do I offend?), bored, realizing that this volunteer business was not exactly the ideal escape from the watchful eyes of their parents, on the other side of the ocean, as they had hoped it would be. Instead, it was work which, of course, is a bore! Oh, I am being hard on them. Sorry. They got me registered, showed me my room, sighed with frustration that I had trouble understanding their Portuguese when one of them was trying to explain to me that the shower in the indoor bathroom should not be used but that the indoor toilet could be used, but only in the middle of the night. Otherwise, we are to use the showers and the bathrooms outside. Why did I have trouble understanding the bit about the shower in the patio?

Fortunately, a quick check in the patio proved that the showers were not exactly outside, just in a building on one side of the patio, complete with roof and door (not that it locked, but for the 5 euros I was paying, what did I expect?).

Also in the patio: a clothesline that makes about a 260-degree loop through trees (yes, trees!), thus more than enough space for four of us to hang the few clothes we were willing to wash in the outdoor sink’s cold water. The groundskeeper was busy mowing the small lawn. He was already working on it when I arrived, and still working on it while I took my shower, washed and hung up clothes, and settled in to write. The machine must have sputtered and stopped a hundred times if it did it once.

“They need to get you a new lawnmower, don’t they?” I asked him. “Yes, but it’s not likely to happen.” This man, a Spanish volunteer, assured me that the plentiful bees were not to be feared. Even more, that the occasional bee sting is good for a person as long as said person doesn’t have an allergy to bee stings. No allergy here, but I’ll take a pass on the healthy sting.

Every half hour, at 25 minutes after the hour and 5 minutes before, the church bells across the street peel out. I’ve been telling myself that I should have my microphone ready to capture them. Kind of a contrast to the croaking of the frogs that I recorded yesterday (and, I admit, again this morning).

This is also quite a contrast to the atmosphere I had while writing last night: by the time I finished there must have been some twenty or more noisy locals in the albergue’s bar, laughing, drinking, sharing tales, cheering for the soccer game on the TV. Katy, oblivious to it all. Concentrating.

But now: the sun is still streaming into this courtyard, the clothes are likely about dry, and I’ll get in on a communal meal in just under an hour, a meal where we’ll all learn a bit more about one another. Since the English speakers don’t know any Romanian or Japanese, we’ll be muddling through with English. Should be fun.

But on to today’s walk.

A tale of many stops

It was really tempting this morning, as I was heading out of Villar, to do that Huerta loop I had walked yesterday afternoon. I started in that direction, and then I made my first good decision of the day. Turned around. My back was feeling particularly sensitive to the weight on it: extra clothing (for the first time on the entire trip, I was wearing neither the long underwear nor the wind/rain pants, thus they added to the bulk and weight of the pack, extra water, extra food for what I thought would be “wilderness.”

Not really. There were numerous small towns. I stopped in a park on the outskirts of one town, more as an excuse to take the pack off for a while. Take an orange out of the pack; put winter jacket and gloves into it. Fair trade. Next town: buy some yogurt, a banana, a bag of peanuts, and some cookies in a grocery store. Find a bench at which to consume some of the purchased food. Remove neck gaiter and cap; dig out sun hat; hook the remaining food on the pack. The following town: eat the second cookie with the café con leche purchased at the bar; swap heavy Smartwool shirt for lightweight one, hang fleece vest from S-hook on the pack. One more town: and here I stay for the night. I did remove more clothes, but fear not! I replaced them with other, cleaner garments.

As for my pack: it’s going to remain too heavy. One thing about our new-and-much-improved weather: extra water is a must.

Human highlights of the day

Other highlights of the day

And I’ll try to make these quick as the pilgrim meal will be served in about 15 minutes and I am more than ready!

Possibly the best evening yet!

And so it is that after having made some rather disparaging remarks above about this hostel, and having expected the worst from the “communal meal” (my, would it be prepared by the sullen Brazilian teens?), much to my surprise it turned out to be one of the most memorable meals/evenings to date. For one thing, there is a retired Spaniard, a volunteer, who stays at this albergue several months/year, and he is the one in charge of the cooking. I had a delicious big bowl of hot green beans and sliced potatoes. Like three of the others, I chose baked chicken for my second course and it, too, was excellent. The other three, however, were jealous of the Romanian woman who was served a whole trout (head and all). We all took photos of Sandrina’s plate. Good fellowship, with English as the key that kept us going, with Takeshi and Sandrina seeming to follow quite well.

But then… then Charlie got out his guitar again, and before long, the dancing began. Yes, even me! For a good long while. We joined Charlie when we knew the lyrics–and sometimes when we didn’t. No language barrier stood in the way of adults being 20-somethings again. Very fun. It wasn’t long before the Brazilian teens who had served us the dinner were peering through the door with their cameras and iPads, filming the dancing and singing some of the music as well. I think perhaps it was the most entertainment they had seen since they began their volunteer gig here.

The moral is one we have all heard often: “Don’t judge a book by its cover” and be open to the fact that first impressions are not always accurate.

The cook left the dining room a while ago, having tired of his solitaire game. My roommates are long in bed. The promised Saturday-in-Leon post has not been written. Tomorrow, fortunately, is another day. I’m heading for the town of Santa Catalina de Somoza just because I can, because who among you would not want to spend some time in a town bearing your name? Maybe there will be less excitement tomorrow night and I’ll get caught up.

In the meantime, I have sent some photos to “the folks at home.” Regina has been doing a great job of incorporating them into the posts and putting some on Facebook. I have found that I just don’t have the time to mess with Instagram, easy as it is. Thanks, Regina.

And if you must know: I pushed the wrong button and lost a good bit of my original post. I have recreated it… but… it was better the first time around. Oh well… 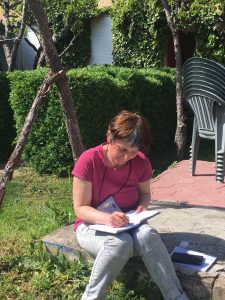 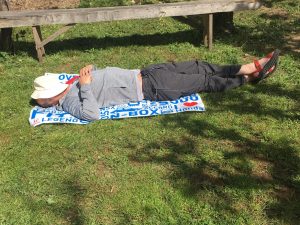 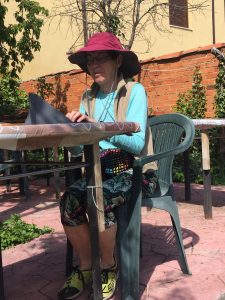 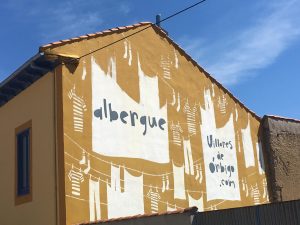 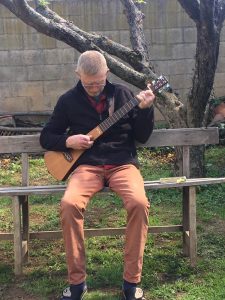 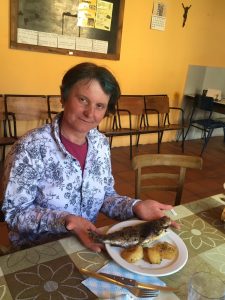 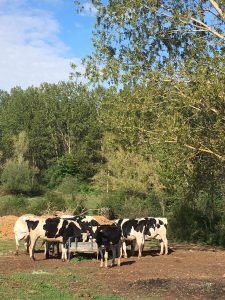 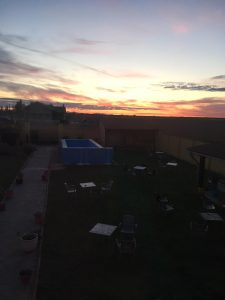 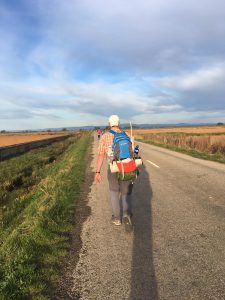 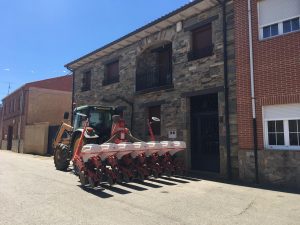 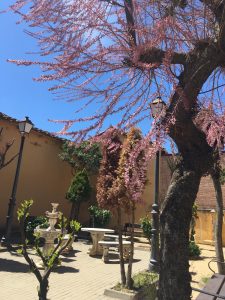 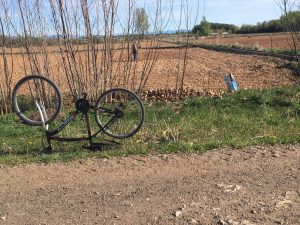 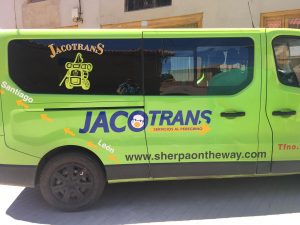 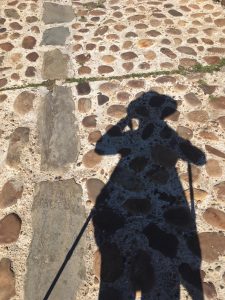