That’s a weight off my shoulders

Yes!  Quite literally!  You see, I’ve been walking with a pack since late August.  Two months now.  I began with a pack I borrowed from Eleanor, kind of testing it out.  Finding the brand and the model to my satisfaction, I placed my biggest Camino-related order to date on Amazon and then, upon the pack’s arrival, I eagerly began filling it, building up from 7 lbs to 17.5.  (My hope will be not to exceed that weight on the Camino; that’s already well over the ridiculously-impossible-for-a-rather-small-woman recommendation of “10% of your body weight.”)

I’ve not been concerned about the “essentials” at this point, so the weight has come mainly from water, a bag of uncooked kamut, another of wild rice, and two full plastic bottles of barbeque sauce.  No way to cook the grains nor any weapons with which to kill the game on which to put the sauce.  I’ve been interested in the heft, not the practicality of the chosen items.  Okay, so maybe a sandwich and fruit in the pack some days.  And always: a whistle, first aid kit, pocket knife, and something to serve as a sit-upon.  Haphazard at best, but, I figure, good practice for hips, knees, feet, legs, back, and shoulders (perhaps, but not necessarily, in that order.  I’m far from an expert in this process…)  The body has been cooperating for the most part, though happier with 13 lbs. than with 17, it must be said.

And happiest at all on a day like today when I threw thoughts of training out the window—and left the backpack in the car—so that I could thoroughly enjoy a “play date” with my daughter.  Maura is nothing if not an advocate for Play and Playful Movement.  She lives for it and delights in it.  While she gets weekly indoor practice with her swings, jumps, vaults, etc., in a Parkour gym in Salem (Oregon, that is), she lives for finding nature’s play spots.  Where others see–and perhaps curse–roots and rocks, she sees possibilities. 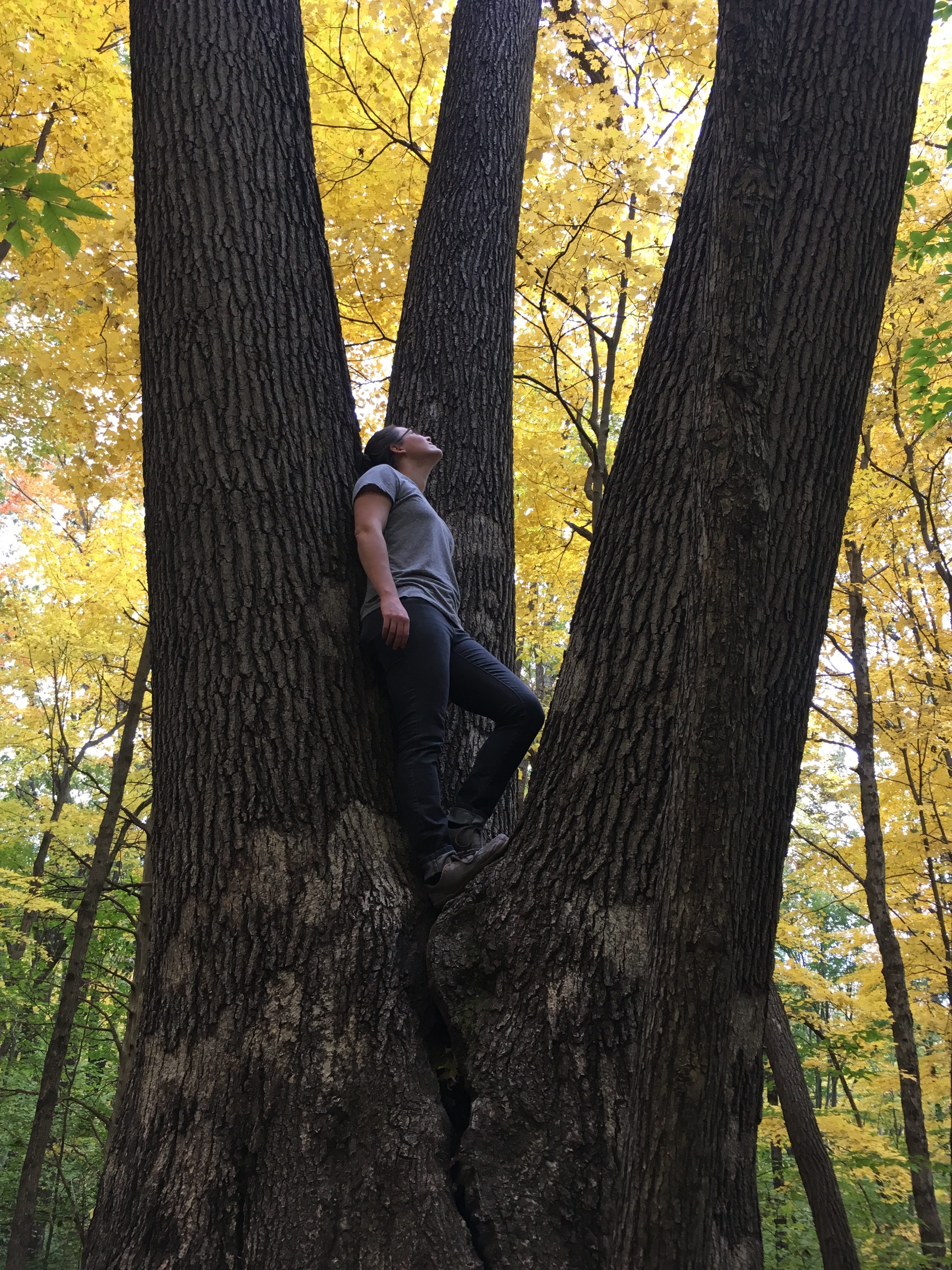 Wow, right? Maura picked the peak of the season for her home visit! Actually, she may be more “at home” in the trees than anywhere else….

As luck—and some planning—would have it, we headed for two such natural areas on this crisp fall day.  Though the names won’t conjure up “memories” for most folks who read this, they are, nonetheless, telling: Cedar Bluff Nature Preserve and Dilcher-Turner Canyon Forest .  Neither site is particularly expansive, but they are certainly well-suited for the playful at heart.  What the Cedar Bluff name doesn’t tell you is that the preserve lies along Clear Creek (or a tributary of same) and that to access the tall limestone bluffs one must first follow along the edge of the creek bed, negotiating rocks aplenty.  “Negotiating”!  I’m giving my age away.  Seniors “negotiate” rocks; children and the young-at-heart “play” on rocks and find multiple ways of challenging themselves as they hop, skip, or jump from one to the other.  I was the observer and the videographer as Maura practiced—oops, another word she would definitely not use; I’ll retract it—as she played.  I couldn’t have found a better playground for her had I set out with that intention.  (My goal had been to “find fall beauty”; Maura found play in the beauty.  Two for the price of one!)  We both enjoyed the experience so much that after the creek play and the hike along the cedar-lined trail on the 75-foot limestone bluff overlooking the water, we returned to our car… only to decide to hit the creek a second time.  More play.

But it was at the Dilcher-Turner Canyon Forest—thank you Dilchers and Turners and all the many folks who have so generously donated their “wild” properties to the Sycamore Land Trust for all to enjoy—that I let out my inner child.  Pretty early on the path was wide enough and obstruction-free enough that it called out to me to skip along it.  And I do mean that.  Skip.  Like we used to do when we were 6 or 7 or 8 years old, innocent and without a care to weigh us down.  So there I went, skipping along.  I’m not talking 5 or 10 skips, but minutes of cavorting like the kid I once was.  Eventually, the trail got a bit more technical, and prudence—and lungs!—dictated that I abandon the skipping.  As we advanced, we were awed by some vines (which yours truly did not hang from or swing on, though her progeny did) and we were fascinated by one tree in particular whose roots mostly seemed to sit on top of the sandstone bluffs rather than in the earth.  How did it manage that?  It was fun watching Maura play around on the roots and to acknowledge, while watching her, that her roots ran deep even as those “wings” she sprouted at a very early age continue to get stronger.  I’m tickled that she derives such pleasure from being outdoors and I hope that I’m at least in part “to blame” for that. 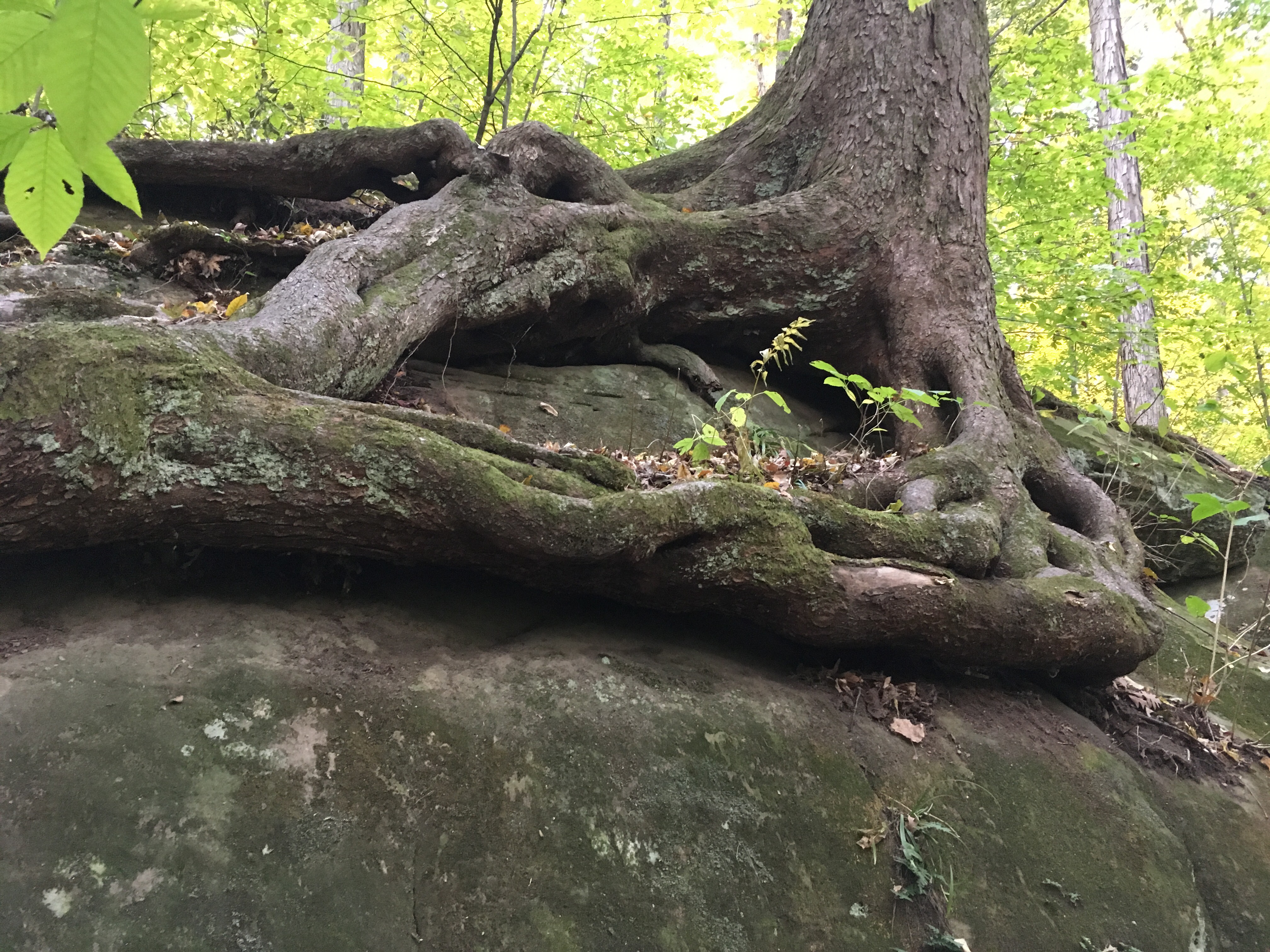 October 30th. A later than usual fall.  Crisp air, but sunny.  We were hitting the sought-after peak of the color and definitely mindful of how privileged we were to be together in the midst of such beauty.  Not a care.  No worries about “training” or “building strength and endurance.”  Just playing.  We weren’t allowing any monkeys on our backs.  Nor any weighty packs on our shoulders.  Not today.