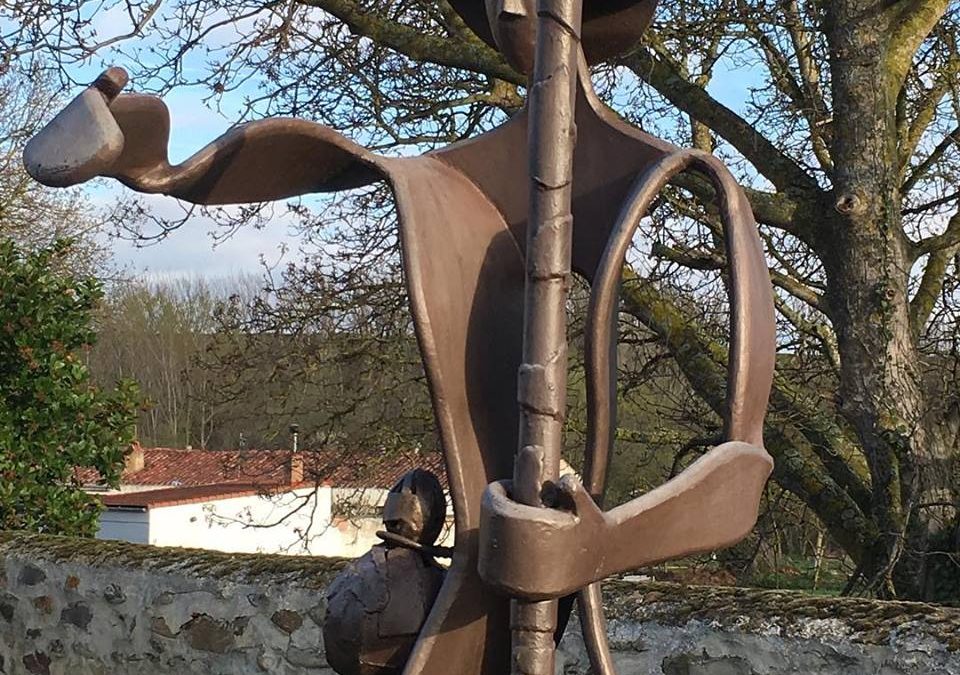 For the 15th day in a row, I slipped into my light (and lightweight) gray skate-boarder pants and the teal heavyweight Smartwool top. So easy not to have to make decisions! The pants have sometimes had long underwear underneath or rain pants over them, but the gray pants have been a constant; the only long pants I brought on this trip. The shirt? Usually topped by a Polartec 200 fleece vest and either my rain jacket or my winter coat. And thus I stay comfortable… except inside some of our albergues where the centuries-old stone buildings still retain the chill of winter but the heat is deemed unnecessary because, after all, it’s the middle of April. Brrrr… The cold is on my mind because I have been sitting upright in bed for the last hour, dressed in the above-mentioned Smartwool shirt and the Smartwool long underwear bottoms on top of my pjs, a wool blanket pulled over me and… missing the two microwaveable bed buddies I would have in bed with me at home, not to mention the flesh-and-blood buddy who would have me warm in a matter of minutes. Ok, pity party over, let’s move on!

Sometimes I title my blog posts and then never get around to including any references or explanations of the title. Let’s get that out of the way now. Yes, the train? You know: “toot, toot.” I keep hearing it, but not seeing trains or tracks. Whatever could it be? Surely not the huge bowl of bean soup I consumed last night? Surely not! But just in case, a fortunate thing I walked alone for the better part of today…. Speaking of trains (well, sort of…): usually when Ken and I are on vacation, our campgrounds are situated near train tracks. We constantly hear the trains rolling through. It occurs to me: other than the train that took us from Madrid to Pamplona back on April 3, I haven’t seen a train or a track. We are really in remote areas. The towns are serviced by buses, though we don’t see those either. Do not believe anyone who tells you that the Camino is on a lot of roadway. Or do not believe that the roadway is one that is traversed by cars. It’s just not so. Or hasn’t been so. There are more snails and caterpillars on the roads we’ve been on than cars, and I’m not exaggerating. This may not always be the case, but so far. As this post asks, “where’s the train?”

Take our lunch, for example. We took an apple and an orange and one wrapped croissant from the breakfast buffet at the albergue. (Yes, I know the sign said that the food there was to be consumed only on the premises. Mea culpa! I did my penance climbing 153 floors today. And besides, we didn’t consume that much at the actual buffet.) We ran back to the dorm room to pick up our packs and head down the Camino, but then Ginny disappeared. She showed up a minute later with a big grin on her face and a plastic bag in her hands. “Lunch,” she said. “I found cheese and chorizo and brown bread and chocolate cookies just left out on the pilgrim’s kitchen table. Stuff people didn’t want to bother packing up.” Ah yes, the Camino provides.

It provided some really cool sights before we’d even gotten through Belorado. I’m afraid Ginny was a gal on a mission and she missed the following. I promise pictures in the next couple of days, but here’s the story behind them:

Some lovely vistas, that’s what. At the beginning. And then, moving forward, we were up into the “mountains” again (high point 1,150 meters or almost 3,800 feet). We left vistas behind for a while, including those snow-covered mountains we’ve been seeing from time to time for days now, and we could enjoy being surrounded by trees: some oak and, to a greater extent, pine. We moved along at our own pace, spending a lot of time in silent marvel and far-reaching, good-fo-the-soul thoughts. Even though the path was wide, the surroundings reminded me of some of my treasured Indiana training hikes. Minus the creek crossings!

I think in another post I may have mentioned my new technique of recording some experiences and thoughts as I walk along, to help boost my memory of them as I reflect on the day and attempt to do a post about it. Both good and bad. It is easy enough for me to get the phone out, press the image of a microphone, and record line after line of text. I’ve just read some of those lines…. Ha! Very difficult to decipher. For every sentence that the recorder got correct, there are many phrases which require translation and interpretation. Still, they serve to jog the memory and even now, as I finish this post three days after the experience, the feelings do come back to me. Lumped together in non-sequential order, I’ll share a few of the details–both thoughts and experiences–of the day. More than you want or need to hear? Too “preachy”? No problem. This is meant to float my boat and may not be at all what keeps yours afloat.

The monastery for pilgrims is, basically, the town. That and the bar adjacent to it to meet the pilgrim’s needs. A few quick observations for my personal recollection, and then something major I want to get to. The quick ones:

But on to the most significant thing about the visit to San Juan de Ortega: the pilgrim’s mass. For once the mass was strictly FOR the pilgrims. I’m sure townsfolk would have been invited had there been any. It was just us. 6:30 pm. Much better than 8:00, right? The priest was the most warm and welcoming one I have encountered thus far. “Hospitality” just dripped from him as if he were a direct descendant of St. Benedict. A wide, compassionate smile. No hurry, as if he had all the time in the world. He spoke only Spanish, and at a pace which allowed any non-native with a moderate command of the language the chance to understand. Each pew had several notebooks with the entire liturgy–the priest’s part, the congregation’s part, given in six parallel columns: English, French, Italian, Spanish, Polish, and German. Before mass started, the priest found volunteers to proclaim the first reading (in French, if I’m remembering correctly) and the prayers of the faithful (in German). All were encouraged to follow along in their own language and to utter responses in their own language. And the two readings were chosen as ones that would be meaningful to pilgrims, most especially the Gospel reading (of the Prodigal Son). The priest’s homily based on the Gospel and spoken with such kindness was perfect in delivery and spot-on in content. This priest was a real shepherd. Many stayed behind to express their appreciation of the celebration. And we were at the dinner table shortly after 7:00. Very special.

That about wraps up Tuesday, April 16. I’ve yet to catch you up on “the road to Burgos,” Wednesday’s trek. It’ll come, along with some photos. I’ve posted (Instagram and Facebook) lots of photos of the 16th. Maybe you’ve seen them.

For now: signing off from Burgos. Not sure when I’ll be able to “publish” this. Perhaps now if I turn on data; perhaps in the morning.