,andandmyThat is  what they say, right?  Don’t get too attached because… you’re gonna have to leave it behind.  Spoken about our end days, of course, but, as I have come to find out in this past week, so very true when it comes to loading a backpack for the Camino!

I envisioned writing two posts and jotted myself a reminder a couple of weeks back.  No, I went even further: I created two drafts here in the hidden recesses of this blog.  It satisfied me, for starters, to have the titles down in writing, awaiting a cheery, lighthearted narrative to accompany each.  “Good riddance” was what I called the first, referring to the items I’d been carrying as “sample weight” since back in September.  The other was entitled “Welcome aboard,” a gleeful greeting to the items which would accompany me on the trek itself.  However, when I actually got down to the dirty business of adding and subtracting items from my backpack, all cheerfulness and lightheartedness fled the scene.  I quickly discovered that my titles were woefully weak for the gargantuan task of truly believing that oft-quoted statement that “less is more.”

Why say “good riddance” to the items that had accompanied me for more than half a year when I traipsed through gorgeous woods as summer turned to fall, fall to winter, and winter to … more winter?  Those items had served me well  for weight and had put no demands on me; most of them didn’t even ask to be used.  They just sat their demurely, not shifting, not protesting when the “day-of” requirements–billfold, car keys, battery stick to recharge phone, phone itself, lunch or snacks, and mittens, hats, neck gaiters and assorted jackets (to accommodate the warming or cooling of the day)–were added or removed.  But for all their faithful service, the moment of reckoning came a little over a week ago and I totally emptied the pack so I could treat it with some critter repellent before reloading it with the “real deal” stuff.

Thus it was that I took out the following, not so much with a “good riddance” but with a “thanks for getting me through training, even though your services weren’t required; you were there for me if I needed you”:  What friends are for, right?

Total weight?  Early on in the training I carried–on a few hikes, anyway–16-17 lbs.  At that time I also had two plastic bottles of barbecue sauce.  I removed one…. and later the second, telling myself that I need not bother because “I was not going to carry that much weight on the Camino!  No way!”   And so, the last few months, my pack has typically weighed about 13 lbs.  Very comfortable.  No complaints.

Some people love to pack.  You’ve probably met those kinds of people.  You may be one of them.  I am not.  Not. in. the. least.  I’ve received some rather shocking looks from friends/fellow hikers–you know who you are; we won’t name names!–when they heard that I had not been doing some “trial loadings” of my pack.  List-maker that I am, I did not want to make a list of what I needed.  Maybe because I sensed that a list of what I “needed” would not include a lot of things that I “wanted.”  So I just plain pushed the expected “confrontation” to the fringes of my mind for as long as possible.

Well, true and not true.  I was online reading packing lists for the Camino back in August if not in July.  I absorbed a lot, got a feel for what people typically brought, asked pilgrims what they wished they had taken and what they wished that had left at home, placed some online orders, waited for Amazon to deliver this or that.  I tried out different combinations of clothing and attempted to test them in a variety of weather conditions.  Gradually the many “this and thats” were carried upstairs to Maura’s bedroom, to what I came to call my “staging area.”  And there they sat.  In piles.  Piles that grew as interested parties made suggestions about what I should be sure to pack or what had proved really useful to them in their travels..  The suggestions made sense and were appreciated.  And the piles grew some more.  Piles that I tried to ignore.

Until I could ignore them no longer.  (And yes, I did start making some lists, especially of the things to which I would need easy access on the airplane vs. those which would go into an upper bin for the duration of the flight.  [I hope!  I hope!  I hope my backpack will qualify as a carry on!  I don’t want to have to check my bag, not just because of the fee involved but because of all those straps on the pack which I can’t afford to have getting stuck in a conveyor belts and breaking….  Once a worry wart, always a worry wart….])

Do you know anything about backpacks and how they are sized?  I didn’t either until I began shopping for one.  I was warned by former pilgrims not to take too large a bag because the larger the bag, the more you will put in it.  Weight that you don’t want to carry.  From the reading I did, I had decided upon a 34-liter pack.  Not too big.  Not too small.

Or is it too small?  “Perfect size for a summer hike,” I find myself thinking now.  Perfect when you aren’t worried about the 32 -degree mornings.  The possible snow.  The cold rain.  The gale-force early spring winds.

But I like my pack, I really do!  It’s a beautiful color. (We all know how “important” that is!)  It has served me well.  I’ve left the house carrying it many a morning with a great sense of adventure and anticipation.  I’m not going to start cursing it.  Not yet, anyway.

OK, I’m dragging this out too much and my departure is looming.  Literally!   I’ll be leaving for the airport in under three hours.  Still have things to check off my to-do list.  Time for summarizing, wrapping up.

During the course of a week, I packed and repacked a good three times.  The first time, admittedly, was pure “wishful thinking.”   I knew I wouldn’t be taking everything I tried to stuff in the pack and into its many exterior pockets.  Still, I had to see for myself.  Results?  As expected, it would not zip.  As expected, it weighed too much.  “Back to the drawing board,” I wrote to Barb and Ginny.  (And then abandoned the task because I just couldn’t face it.)

Several days passed.  My stepdaughter came by.  Regina is one of those people who loves to pack.  She looked at me with hopeful eyes, like a puppy dog waiting for you to get the leash and take it for an outing.  So, up we went to the aforementioned “staging area.”  Together we went through the miscellaneous outer pockets of the pack, tossing many this, thats, and the others into an empty crate set aside for the purpose.  It was brutal.  She was brutal.  All in the name of my back, my hips, my legs, and, especially, my feet that have to keep the whole operation moving forward.  Many sighs on my part.  I really didn’t want to see the tube of lipstick go.  The “puffy” for the shower.  My grandmother’s butter knife….

Fast forward a couple of days.  I return to what is now seeming more like an “execution area” than a “staging one.”  Regina and I hadn’t even looked at the clothing.  More elimination.  Sad!  Hard!  I don’t want to “let go.”  So have a quick glance at the following list of some of the things that didn’t make the cut:

And then?  The good news: the pack now zipped and it weighed 2 or 3 pounds less.  Below is a photo with the pack in place on my back.  I couldn’t say for sure whether the photo was taken after its second re-packing or after the third. 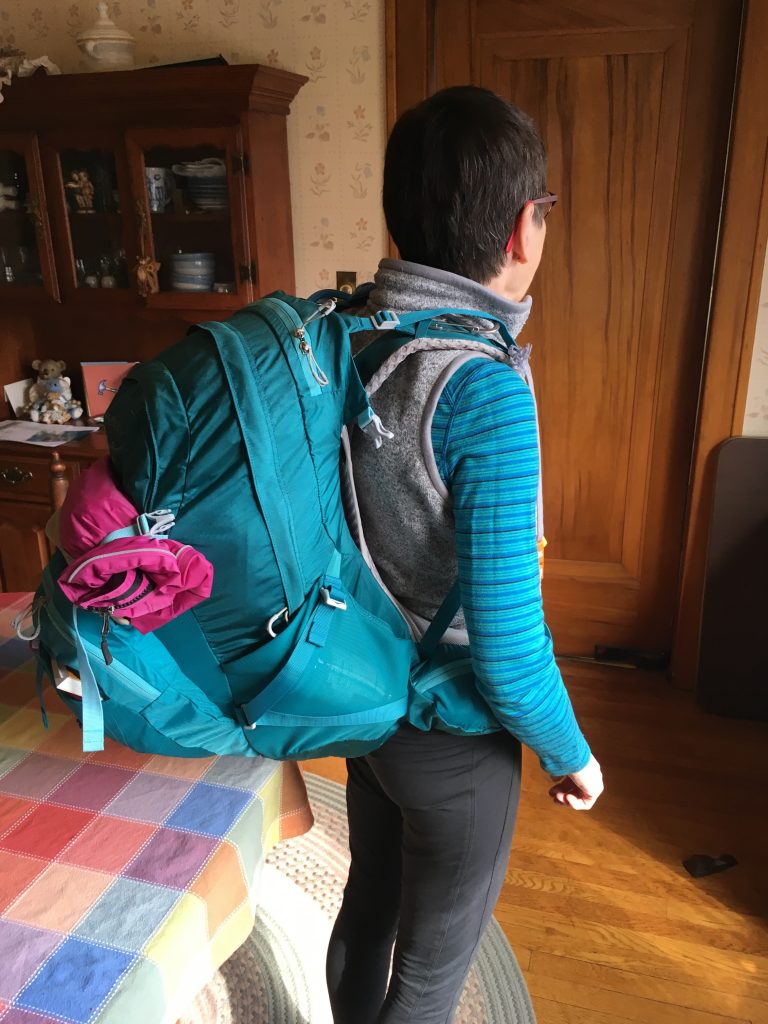 What one notices immediately, though, is that the pack is obviously too wide to be considered a “carry-on”….  Which is why I’ll head off to the airport today wearing my fleece vest and my rain jacket, and why I’ll be cinching those straps just as tight as can be.  And praying that both the Delta and the Iberia employees are sort of looking the other way.  The TSA people as well.  (“But what could they possibly object to?” you ask.  Maybe the diaper pins?  The nail trimmers?  The plastic bags with unidentified pills (“Would you like to see a picture of the original bottles?” I will innocently ask).

Really, my time is running out.  And all I’ve mentioned so far–except for the diaper pins, the pills, the vest, and the rain jacket) is what I’m not taking.

You still wanting that “packing list”?  Remember, I told you I never made one.  There are many online.  Check them out for yourself.  And maybe, just maybe, I’ll add to this post while on the plane today.  And truth be told–Gospel truth!–I’m still wavering about two items.  I already mentioned the guidebook.  The other?  My winter puffy jacket.  I’d been telling myself for months that I wouldn’t take it.  That I couldn’t take it.  That I could survive a few early-morning temperatures in the low 30s, knowing that the day would warm up and that the exertion of carrying the pack and walking uphill would warm me up.  Almost believing it!  And then last Saturday night we had occasion to walk downtown in the most miserable, cold, pelting rain I have ever experienced!  The next day I experimented to see if I could still zip my pack after stuffing my jacket into it.  The final verdict will be made within 2.5 hours.

Non-negotiable: my keyboard.  It’s coming along.  May get abandoned along the way, just as my plans to send posts and updates and photos very regularly may be abandoned.  But it’s coming!

I’ll leave you with one final photo.  It is of the cube which holds all the clothing I’m taking except for the following: what I’ll be wearing, my outerwear, and my sleepwear.  In other words, the cube holds my pants, tops, underwear, and socks, plus mittens, hat, and headband.  On top of the cube, to give you an idea of the bag’s size, you see a pair of lightweight Keens which will serve as my second pair of shoes, the post-hike “bumming around” ones for evening. 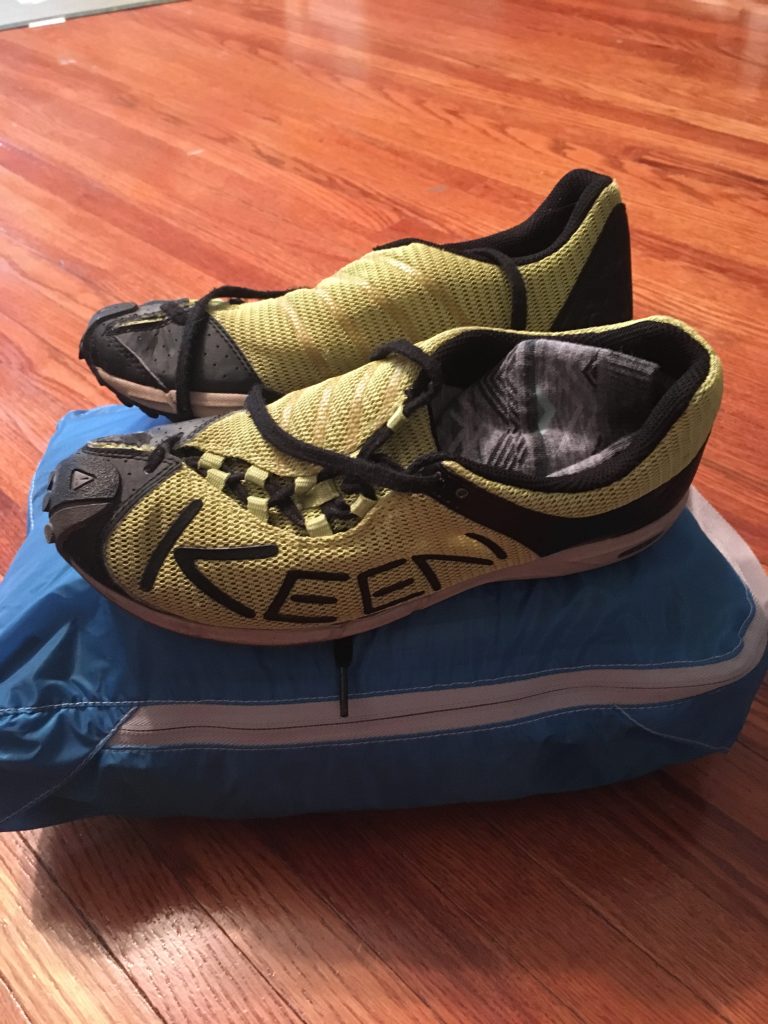 Sometimes a picture is worth a thousand words.  The above photo should prepare you for the fact that I’m not going to be a fashion statement as I walk the Camino.  (If only I could have slipped in that lipstick….)

PS: To those who were really curious about my packing list…, uh… sorry to disappoint.  This post has been a bit of a teaser.  It’s just that the notion of “You can’t take it with you!” is foremost on my mind.  ‘Nuf said!