I had nothing at all to do with planning today’s adventure, but I was a very willing participant.  For the second time in as many weeks, I joined the Bloomington WOW (Women of the Woods) group for their 2nd annual “hot potato hike” at Brown County State Park.  Did we have any idea when tasks were being assigned just how much we would appreciate the hot apple cider?  Or the kindling and logs and the propane torch that would ignite them and give us almost immediate heat?  And the shelter itself where we would indulge in a post-hike feast that included—in addition to  the still-hot baked potatoes and the butter, sour cream, chives, grated cheese, barbecue pork with which to top them—three kinds of hummus, fresh veggies, tortilla dippers, and an assortment of delicious cookies?   No.  But then how were we to know that temperatures would dip as they did and that the trees would be coated in ice?  And how were we to know that for the entire morning that ice would follow gravity’s call and pelt us as we completed Trail #6 near Strahl Lake? 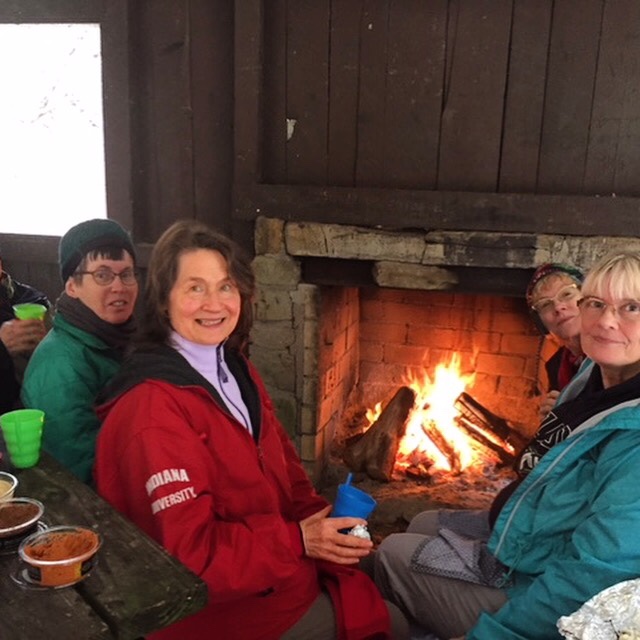 Warming ourselves by the fire after our Hot Potato Hike

In a way, isn’t the unknown a huge part of the adventure?  Weather is unpredictable—even though we repeatedly check our weather apps and try to prepare accordingly.  Our bodies are unpredictable, too.  Some days we get up feeling we can conquer the world… and other days we admit to being the conquered.  Case in point: three women who expected to be with us today had to bow out for a variety of reasons that I think involved bodies that were talking back to their owners.  Also unpredictable: will we have all the supplies we need?  Oops… Sandra remembered the forks and the tablecloth and the cloth napkins, but… the plates she was going to bring didn’t make it.  Part of the adventure!  We easily improvised and found that the foil in which the potatoes were wrapped could do excellent double duty as plates.  Problem solved.

And so I hope it will be in Spain.  Innovate.  Make do.  Go with the flow.  Solve the problem.  Give help.  Accept help.  Swap.  Be creative.  Enjoy other people.  Tell stories.  Listen to others’ stories.  Really listen.  Really, really listen.  And keep those eyes wide open to take it all in.  An open heart, too.  And, it goes without saying, an open mind.

After the WOW lunch, I went off hiking on my own to add in a bit of speed, climb some ferocious Brown County hills—Pyrenees here I come!–and “practice” solitude.  Trail 9 of the park was ideal for the latter, though it was a bit disconcerting to hear gun shots echoing off the hills (really?  in a state park?  and what was that “hunters’ check in” sign all about?).  I had truly loved the morning chatter, laughter, and camaraderie, but I also treasured the mostly-quiet afternoon and the need to pay careful attention to my surroundings so as to stay on the trail and not be distracted by possible spurs.  I’ve hiked so little alone lately; it was good to see that I still do enjoy my own company.

I admit: by the time I returned to the car, my hips and my toes were not exactly shouting “Thank you, thank you, for bringing us along with you!”  I don’t blame them for protesting a bit, as my Fitbit reported at day’s end that I had climbed—and thus descended, as well—150 “floors.”  That was 50 “floors” more than a week earlier when I had actually walked four miles further.  The hiking in this renowned park is clearly not for flatlanders.  Conquering the hills, though, caused another part of my anatomy to declare their alleluias loud and clear: my hands were absolutely toasty by the end.  If you know me, then you know those hands doesn’t usually warm up between October and May!

In the end, what’s not to love about those dramatic ridges and valleys of Indiana’s most acclaimed state park?  All I can say is… WOW!

Reminder: I try to post the occasional picture with my blog, but I’ve been told that WordPress is not the best platform for photos.  You can check out a more complete collection on Instagram (follow katys.camino) or, if you prefer, on a special Camino-dedicated Facebook page, called, believe it or not, Katy’s Camino which Maura has been kind enough to set up for me.