True confession: I have been unfaithful.  My bikes have been shut up in the barn, abandoned, discarded, barely thought about and, I must admit, not even lusted after for a good six weeks.  My longest lap in 2018.  The longest one in memory, for that matter.  In my effort to log in the hiking miles, I have turned my back on the biking.  I have had to recognize that though my to-do list grows, my days still have only 24 hours in them.  Fewer than half of those hours include daylight, and still fewer of them include temperatures at which one wants to ride.

Today, though, the promised 50 degrees, along with Ken’s plan to take a spin on the trail we can access just half a mile from our house, persuaded me.  I approached my steed with no small amount of sorrow for my unfaithfulness.  But Townie, bless her, didn’t seem to hold any grudges.  Especially once I filled her soft tires and promised her an adventure.  “No hard feelings,” she seemed to say.  Apparently I felt worse about my treason than she did.

I didn’t get more than a block from home before I had forgiven myself as well.  Chilly, yes.  It’s only natural that 10 mph will create more breeze than the 2.3 mph of my typical hiking-in-the-woods pace.  I was dressed for it, though.  Before long I had a song stuck in my head and we soon got far enough from other trail users that I was compelled to sing out loud.

Townie doesn’t object to leaving the pavement and so we continued on to the Bloomington Rail Trail and were treated to a much more complete view than the one we get when the leaves are on the trees.  We came upon some interesting vines that were totally intertwined as they made their way towards the higher branches of the tree to which they clung.  I can’t say that I had ever noticed such twisted vines.  I took it as a sign and symbol: one of the vines represents me, the other, my passion for biking.  I may have set the bike aside for a while, but we are, in the end, inseparable.  My biking days are not over. 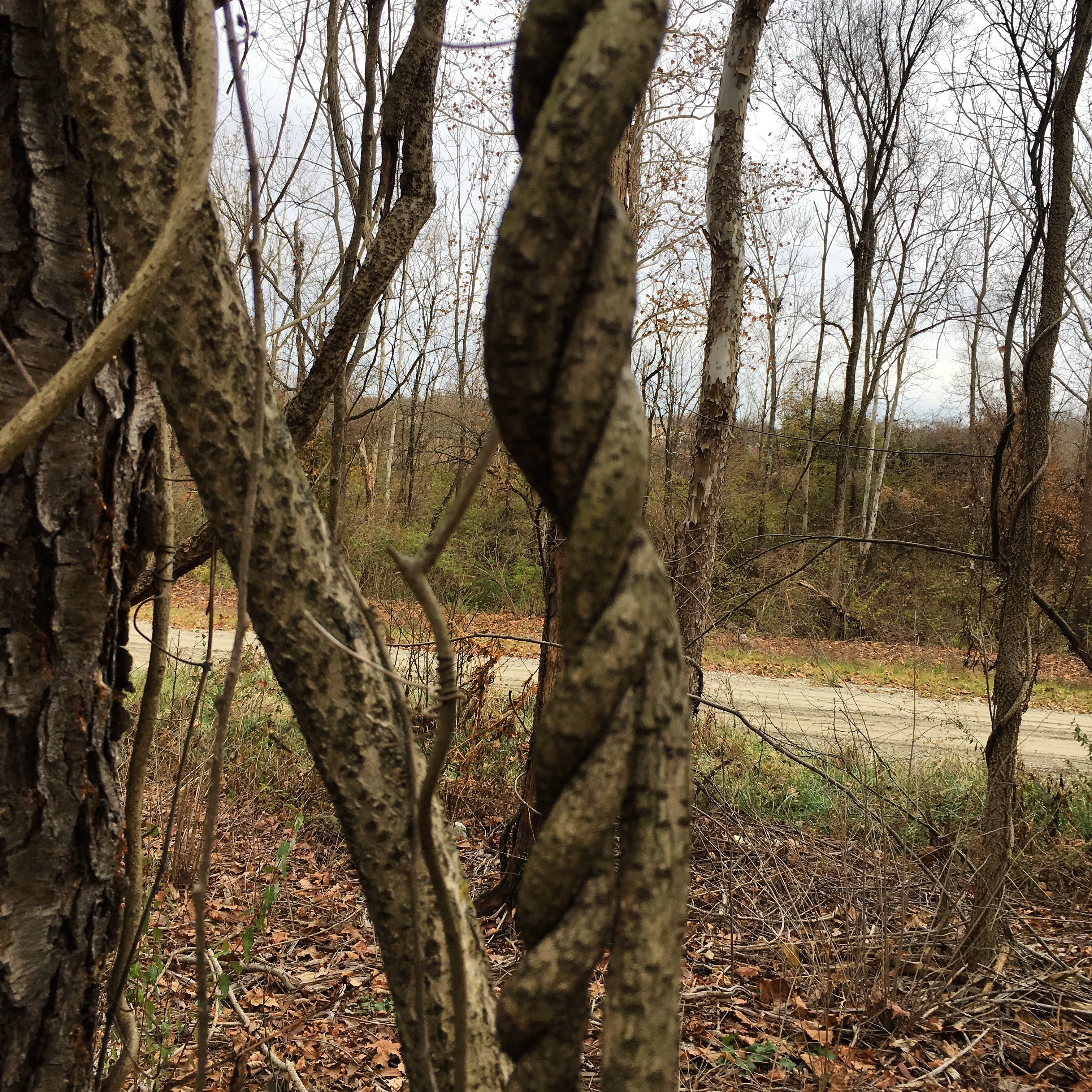 No, they are not over.  They are not even over for 2018.  I may remain at only 93% of my goal of 2,000 biking miles for this year, but I’m determined to meet another goal, that of riding during every single month of the year.  Watch out, December, I’ll be out there.  At least once.