More adventure than I bargained for…

The rain had moved on and the hourly forecast called for highs in the lower 60s.  Not bad for a late November day.  Thinking that I’d like to get some hiking miles in without going too far afield, I decided to head for the “tried and true” Griffy Lake Nature Preserve.  A warmer day calls for a good bit of water In my Camelbak; a mid–day hike demands a trail lunch; a solo hike permits bringing my iPod along so I can continue listening to the audiobook I’m hooked on; training guidelines say: “Work up to carrying the weight you expect to have on your “real” hike.  So, feeling energetic and enthusiastic, I don’t balk at the 17 lbs. in my pack.  After all, the trails at Griffy are pretty flat.

It was about a month ago when Kevin, Maura, and I were at Griffy on a drizzly but actually quite pleasant October afternoon.  As far as I recall, I had never proceeded as far along the Griffy Creek Trail as we did that day.  Still, we hadn’t reached the end when Kevin voted to head back to the vehicle.  Aw…  Well, a month later, I was my own boss; there was no one with me to suggest an about face.  I was excited about continuing on to the end of this out-and-back trail.  Creek and valley.  Easy-peasy. 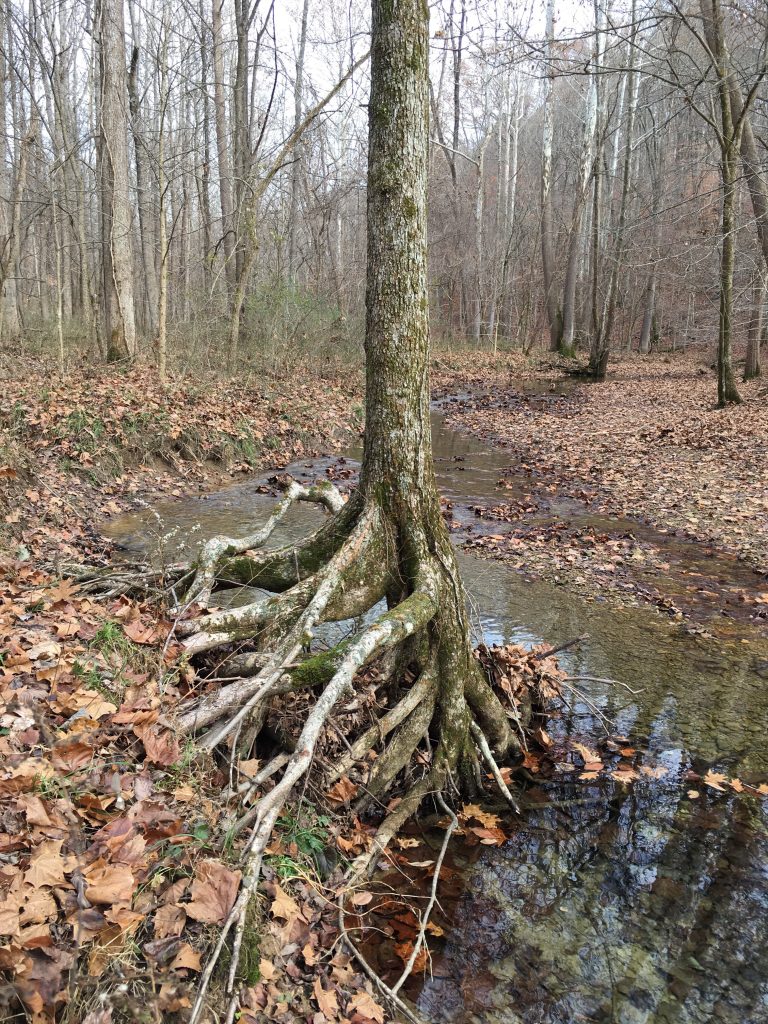 Why did the hiker cross the creek? Duh!  ”Cuz there’s more trail on the other side!

Easy, that is, until I had to cross the creek.  Once, twice, three times, and yet a fourth, knowing that I’d have those same crossings once I turned around..  But no biggie: there were some strategically-placed, if somewhat slippery rocks at one or two crossings; the water wasn’t deep; my waterproof boots needed a christening, and… wasn’t I clever to notice the tree which had fallen across the creek, allowing me a handhold as my boots found purchase on rocks and accumulated leaf piles.  I was feeling pretty confident, though at the same time I wondered what might happen if I had a major slip and needed assistance…. The parking lot had been full of cars, but I wasn’t seeing others on this more remote section of the trail.

But hey, after enjoying a creekside lunch of turkey salad, I made my way back to the parking lot and sought out a totally new-to-me trail on the other side of the road.  Full disclosure: not totally new.  Ken and I had walked at least a portion of the North Shore Trail at some point during our first year of dating some 42 years ago.  I remember sitting on a rock overlooking the lake and sharing a kiss.  That’s all I remember about the trail back then.  Kevin told me, the day before this second venture along the north shore of the lake that he had started it a time or two; he confirmed my suspicions that it wasn’t all that easy to follow.  His computer open, Kevin pulled up a city brochure with a map of all the trails at Griffy and we looked it over.  Ah, but we didn’t read the description of that particular trail.  Today, one day after my hike, I call up the brochure again and see exactly how it describes this 1.5-mile trail:

Yes!  I concur!  Add to that description: “and you are likely to lose the trail at some point and find it necessary to head cross-country until you come upon it again.” So, had I read that beforehand, would I have decided against the trail?  Probably not.  I would most likely have told myself: Self, you can just turn around if you find it too challenging.  Did I turn around?  Of course not!

Was it rugged or was that just a disclaimer to release the city from liability?  How often is “rugged” really “rugged,” after all?  YES!  It was rugged!  I have been hitting a lot of trails in the last five months, and I am convinced this one surpasses the others in terms of being challenging.  Yes, it has the “narrow pathways” AND those narrow pathways are along the “steep slopes.”  Yes, I lost the trail and found myself making my way through briar patches in search of the next ravine where I felt I was likely to meet up with the trail again.  Fellow hikers were few and far between.  I was basically on my own to find my way, though the lake shore was a godsend in terms of orientation.

Did I make it to the end–the dam–before retracing my steps?  Yes!  At least I had that reward!  More importantly: did I make it back to my car?

That, too.  With 9 miles total to my credit.  But… there was… a fall….  Not a long one, but not so pretty either.  It involved a big angled stone on a steep slope.  It involved my body doing at least one roll over the 17-lb. backpack.  Abrasions and bruises on my right hand, “carpet burn” on or near both elbows, scattered hiking poles, and a huge reminder that I am no longer a 20 or 30-something!  The good news?  No broken glasses or bones, no torn or blood-stained clothing, no humiliation (if no one sees you fall, then did you really fall?).  I struggled to use my right hand last night even to do simple things like turn off the bedroom light or push the button to start my electric toothbrush, but here I am this morning typing with relative ease.  Our bodies are pretty awesome.

Darn it all, anyway, though!  I had hiked 200 miles before I tripped the first time.  Also at Griffy, now that I think about it….  I expected to get in at least another 200 miles before a reocurrence.  Instead, it was a mere 100.  So… I’d better be cautious when I’m about to complete another 50.  Maybe daily caution is called for.  Along with a bit more common sense when I choose my adventures.