Mother Nature has been busy!

I had the opportunity to revisit the Three Lakes Trail in Morgan Monroe State Forest a few days ago.  I feel so fortunate to have access to this outstanding trail so close to home: just 45 minutes from the time we’re backing out of our driveway ’til our packs are on our backs, our poles at the ready, and we’re setting off down the trail.  We, in this case, were myself, co-pilgrim Barb, and friend Sue.  Here you see us near the end of our trek and you’ll note: we’re still smiling! 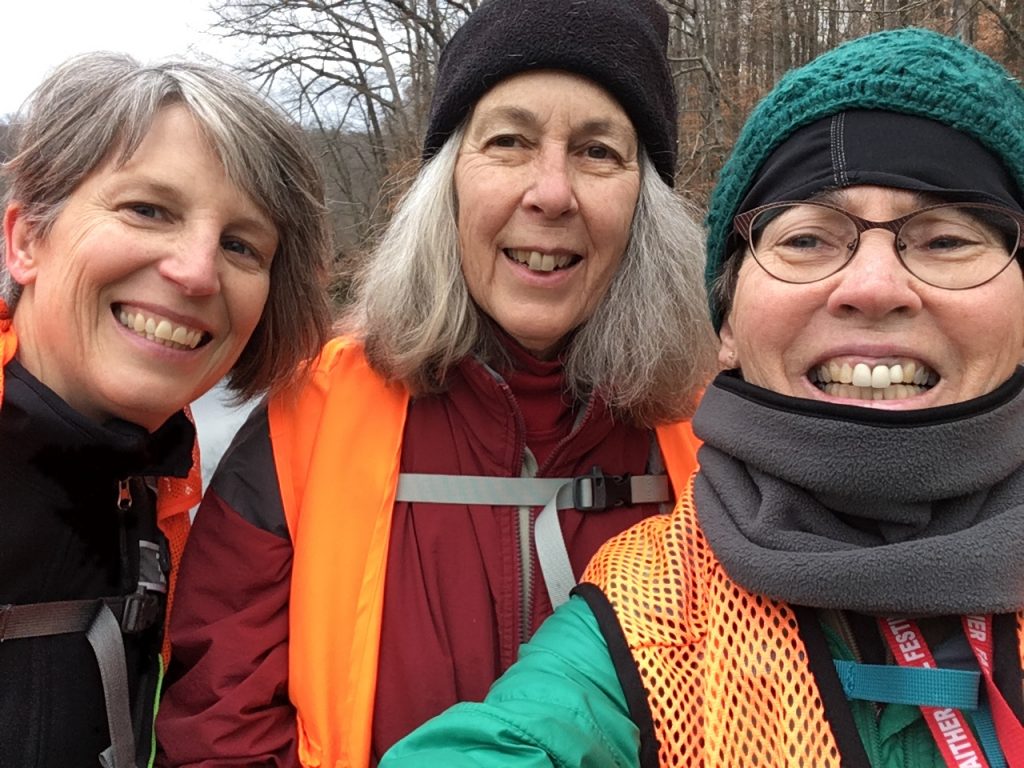 From left: Sue (the PCT hiker), Barb (the birthday girl), and myself (photographer, “reporter,” and by far the most bundled up of the trio)

I’ve logged nearly 350 training miles and over 60 hikes since I began keeping a record back in July, but only a handful of them have been 10 or more miles in length.  This one tops the list at a bit over 11 miles, and I’ve done it not once but twice this fall.  Ah, but what a difference 65 days can make!  Sure, the two lakes seem more or less the same (and please don’t ask me why it is called the Three Lakes Trail when it has only a pair of lakes; there’s surely an explanation, but I am not in the know); the creek bed and the occasional rock wall are still in the same position; the switchbacks that help hikers negotiate the steeper climbs are in place; the hard work done by trailblazers and trail builders is as obvious in early December as it was in late September.  The same 159 “floors” of climbing were recorded by my Fitbit on both occasions.

Oh, but Mother Nature has had some busy weeks indeed!  Earlier this fall I delighted at the occasional leaf that had turned, but had to accept that I was a good three weeks early for the real deal in terms of color display.  Now: the forest floor is thick with the fallen leaves.  Those damp leaves hide from view not only the tree roots and stones just daring us to stumble but also the seemingly endless variety of acorns that had caught my eye on my earlier excursion.  And while the hills and valleys hadn’t changed one iota, with the leaves gone we had an uninterrupted view of them.  I swear: green really is my favorite color and no one loves a trek through a lush forest more than I do, but this is equally true: there is tremendous beauty in a naked woodland, especially one with the variety of terrain as in this hilly area of Morgan and Monroe counties.  (And then there’s this: at this time of year, no ticks to worry about, no insects to annoy, no sweat running down your back, no fear of heat stroke…) In September I was really drawn to the abundance of what I am going to call “mushrooms.”  Six or seven weeks later, it was the “fungi” begging to be photographed.  September’s creek wasn’t as full and didn’t require the rock hopping or the big jumps that December demanded.  Whereas a brilliant sun back in September fought its way through the foliage to warm my back and to coax marvelous smells out of the fallen pine needles, in December the miniature snowballs (or snow “pellets” perhaps, for they were not what one would call “flakes”) fell unemcumbered through the bare branches and landed on our noses and on the fungi clinging to fallen trees.  Oh, another difference: the abundance of white blazes painted on the trees!  The trail was really well marked.  I don’t remember having such access to the blazes when I walked this trail earlier; perhaps the leaves interfered with my viewing them then, or perhaps they have been repainted recently.  At any rate, the blazes were comforting reminders that indeed we still were on the trail.  We weren’t lost.  We weren’t going to end up, against our wills, with an extra three or four miles by trail’s end. 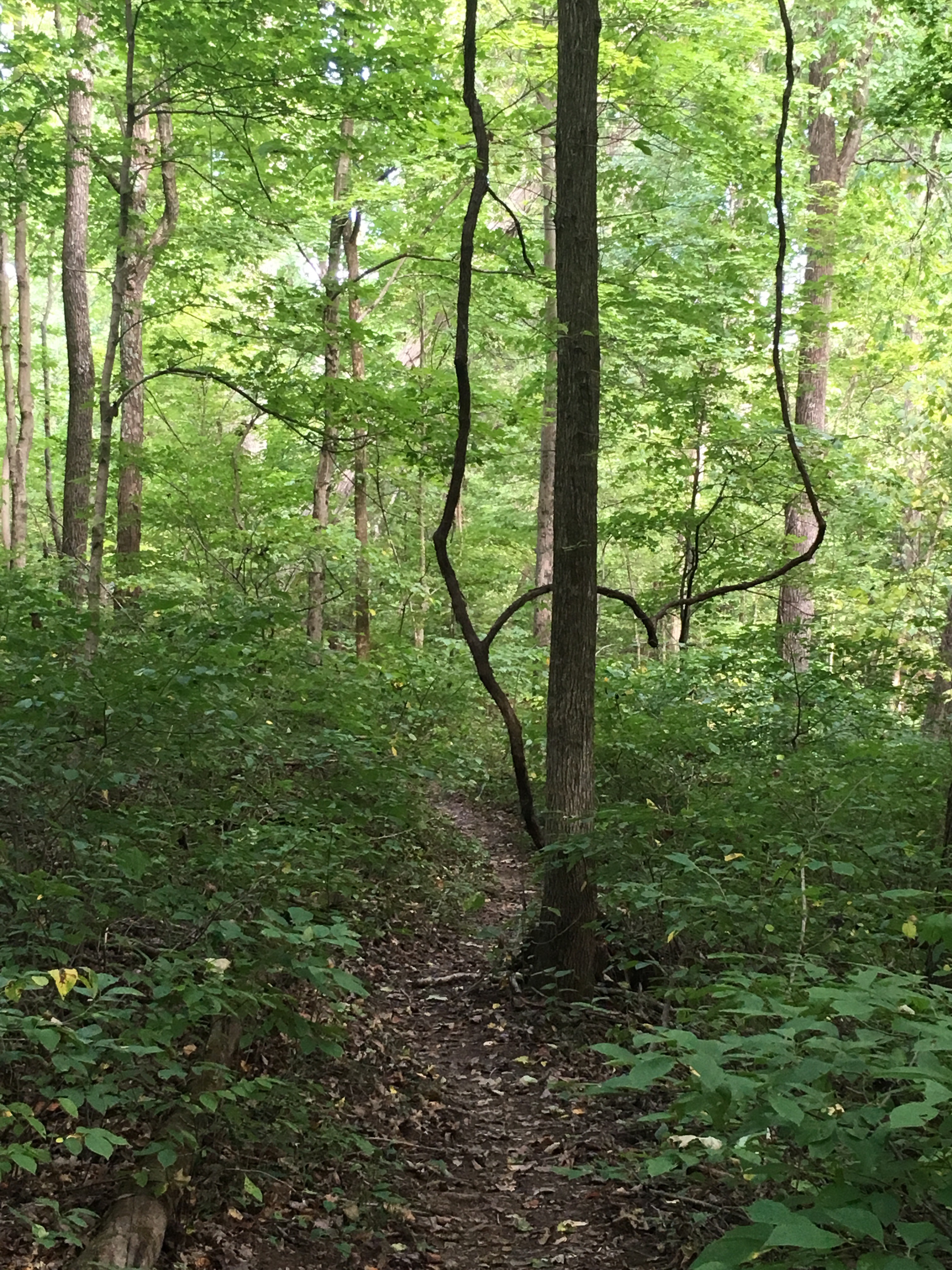 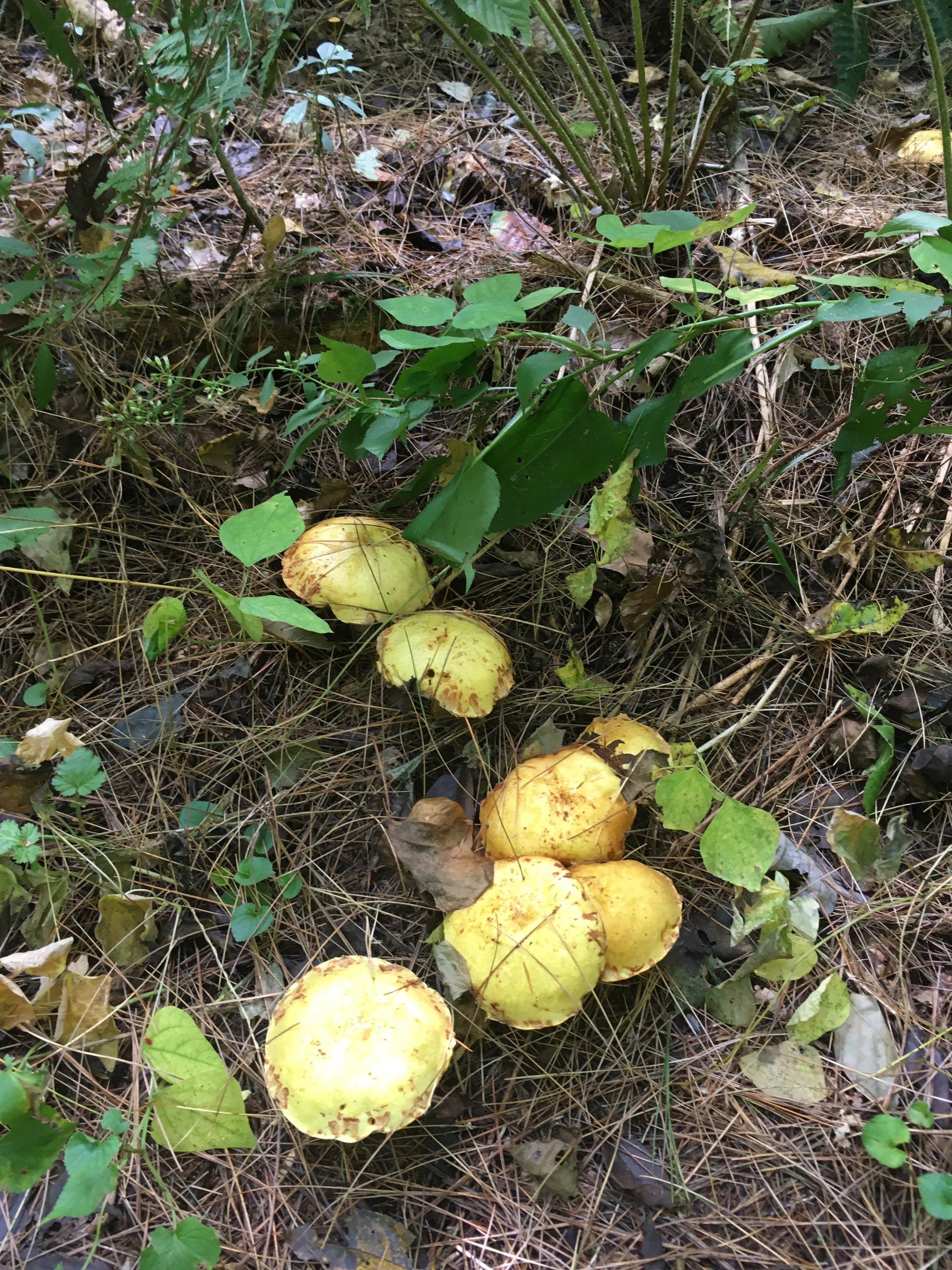 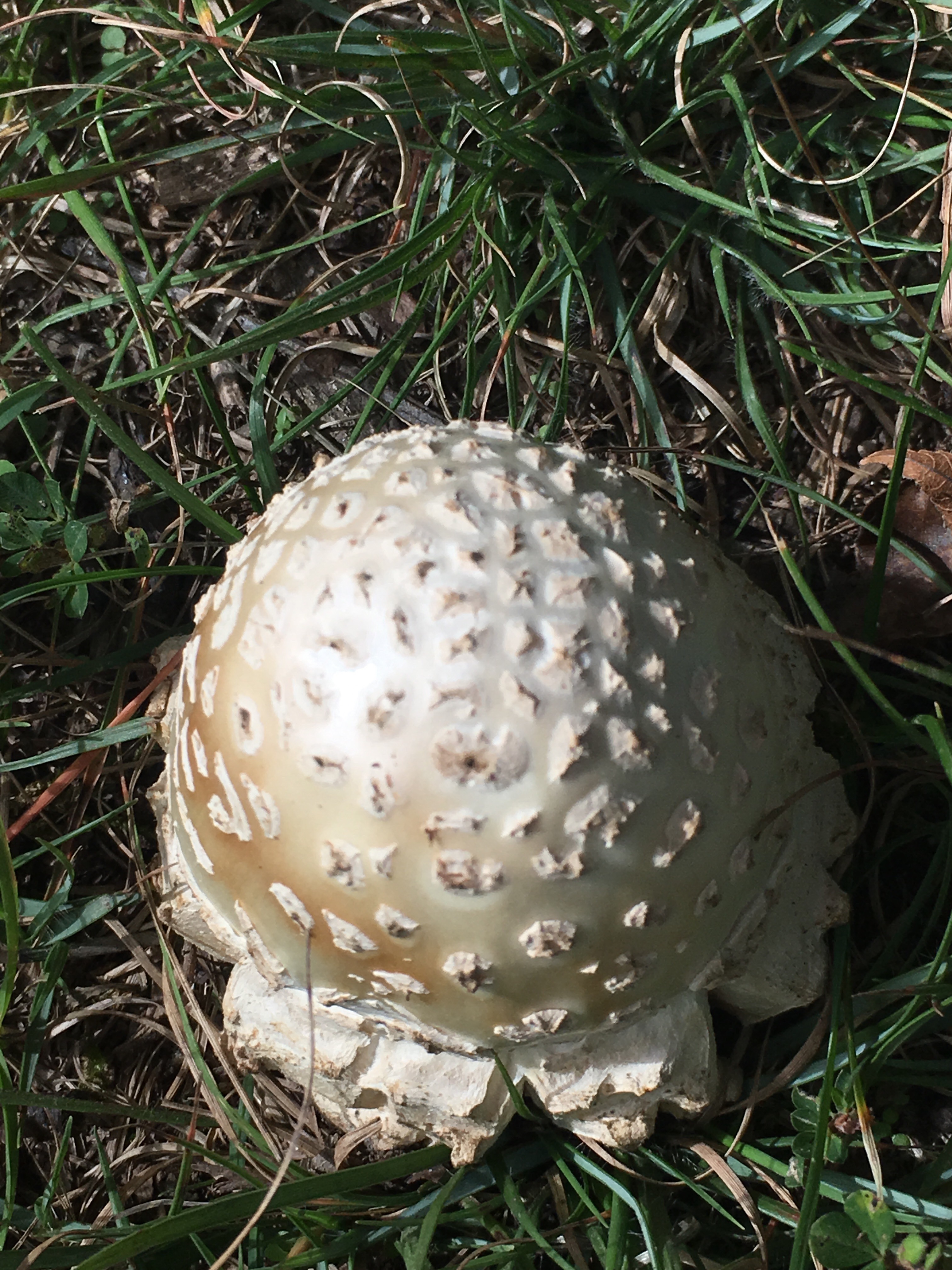 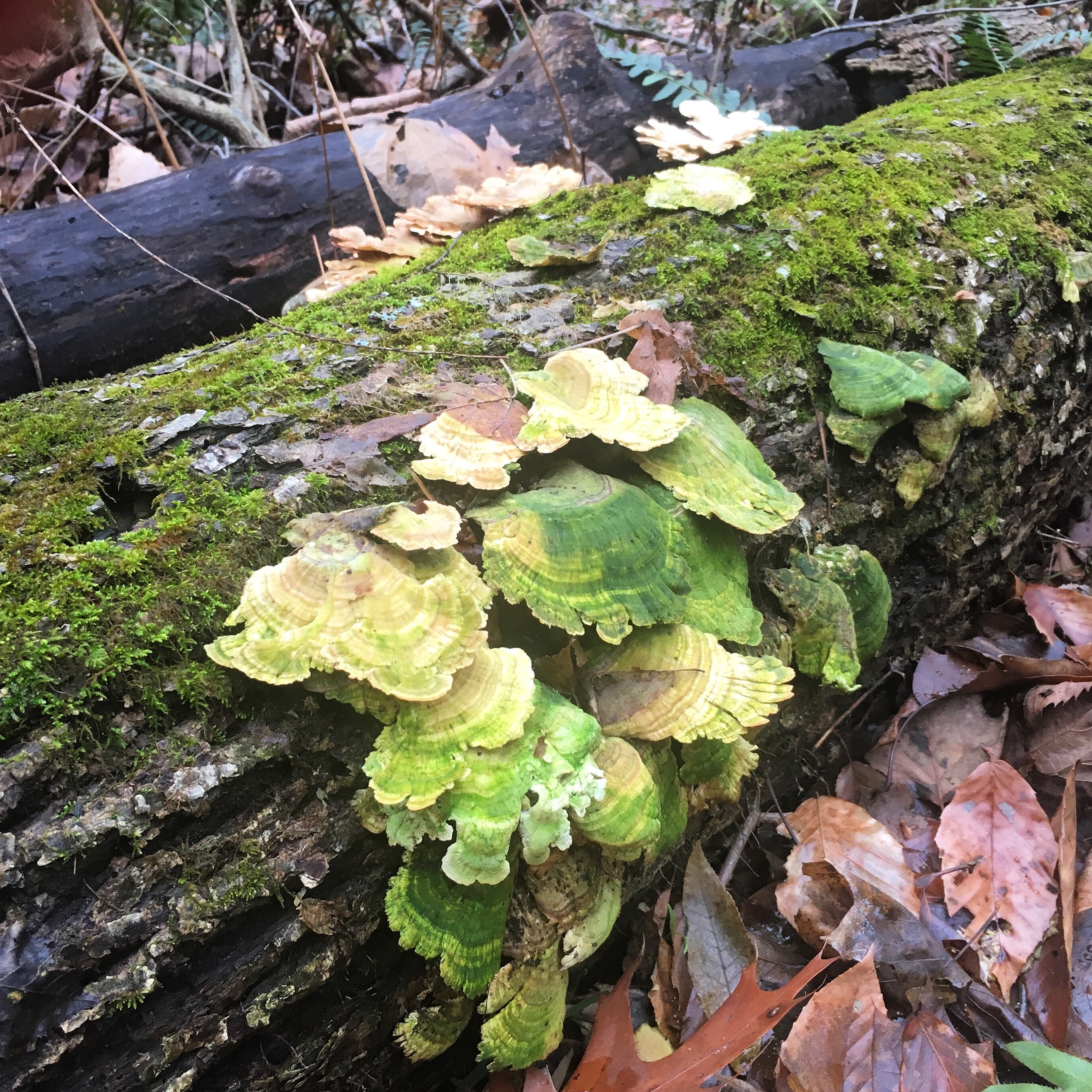 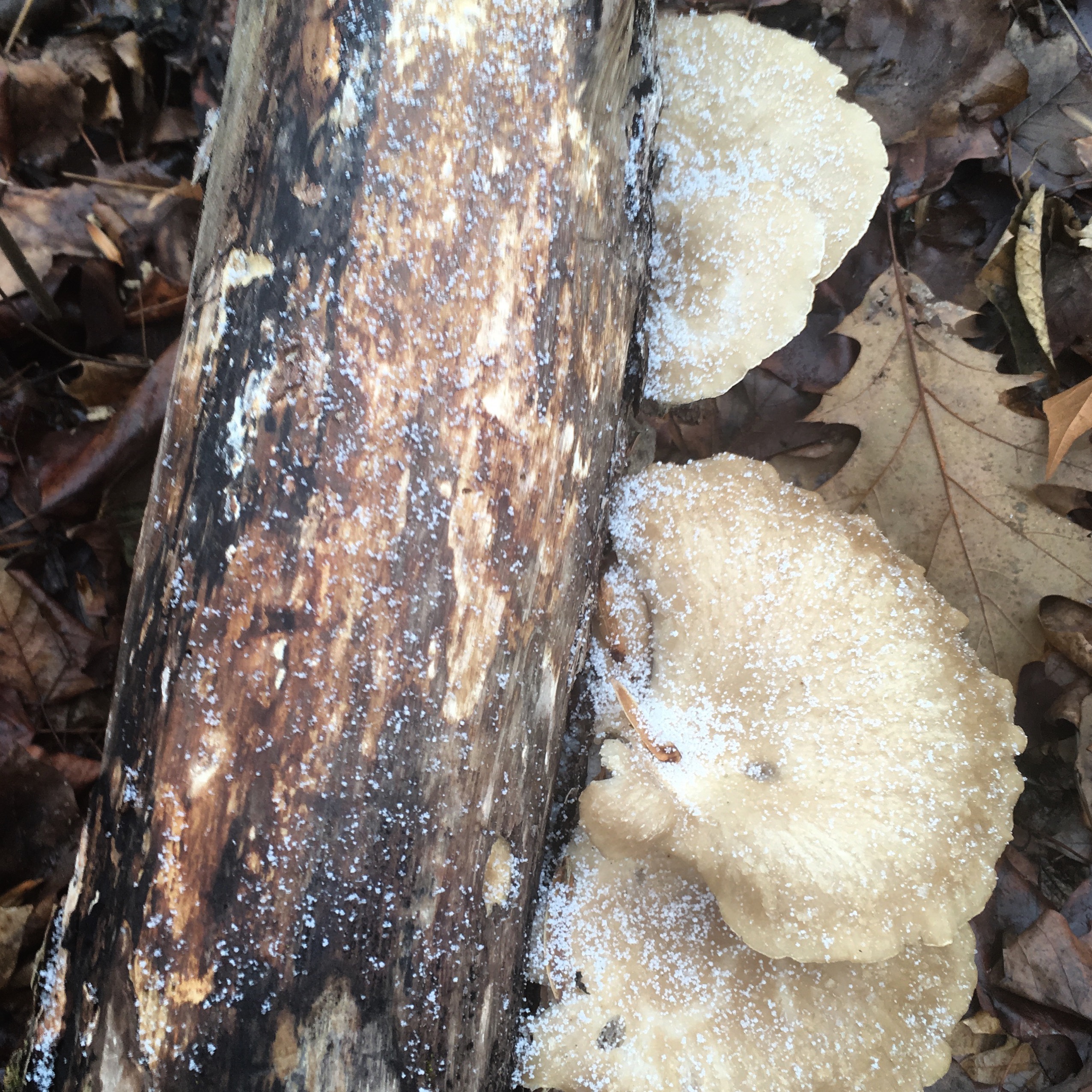 My previous hike was on a Saturday and coincided with opening day of “youth hunting season.”  Mind you, this does not refer to a day on which youth are to be hunted down, but rather a week-end when those ages 17 and under can bring down one antlered deer and one or more non-antlered.  It was, I’ll admit, a bit unnerving to hear shots that day, and, believe me, I was decked out in blaze orange.  My hearing leaves a lot to be desired, but I only counted five “explosions” that day and they all seemed distant.  My guess is that the youth were tired from all the thumb exercises they had performed on their phones’ keypads the night before and thus most of the would-be hunters had slept in that morning.  Again, though, I note how much can happen in a few weeks.  Youth season lasted only a week-end, and the short firearm season had come and gone by the time my friends and I went into the woods.  We were alone.  We saw neither hunters nor hikers nor outdoor enthusiasts.  Only trees.  Hillsides.  Decaying leaves, so damp from recent rains that they had lost their crunch and crackle.

So it was quiet?  Are you kidding?  Three women friends quiet?  Hardly!  But here’s the interesting part:  Barb and I are getting ready to tackle the Camino, so you would think we have a lot on our plates, much to discuss as we share what we have learned or read about this major undertaking.  That might certainly be true were it not for the fact that our upcoming adventure seems like a mere Sunday afternoon walk in the park compared to what Sue and her husband are embarking on a few weeks after Barb and I head to Spain.  Sue and Steve have gotten the go-ahead via a lottery system for a through-hike of the 2500+-mile Pacific Crest Trail (PCT to those “in the know”) that runs up the coast from the Mexican border to the Canadian.  It is impossible to refrain from asking Sue a million and one questions about the logistics of this upcoming endeavor.  Among the things that she has to worry about: carrying enough water to get through the desert; having bear-proof canisters for food; (possibly) needing to carry out rather than bury as much as a week’s worth of bodily wastes at a time; preparing the boxes which her son can send to various post offices along the route with appropriate supplies; getting along with a spouse in such close quarters for the five months it will take them to complete the trek; washing out clothes and preparing meal after meal after meal when resupply possibilities may sometimes be as many as ten days apart; etc., etc.

I think just listening to Sue, of whom we are in absolute awe, is very calming for Barb and me.  We will pass multiple sources of water and food each and every day.  We will be sleeping indoors.  We will probably never be out of sight of fellow pilgrims for more than 10 minutes.  The Camino is only 500 miles.  Absolute piece of cake!  Thanks, Sue, for putting it all into perspective!  We admire you no end.  We might wish we were youngsters like you, and we might tell ourselves that if that were the case we might consider doing at least the Appalachian Trail… but, truth is, we’ve got a good ten years on you.  And so we say: better you and Steve on the PCT than us; we’ll be more than content with bagging the Camino.  Nonetheless, we’re going to keep asking those questions because 1) your adventure is so daring and exciting, and 2) doing so keeps us from having to focus on all the little decisions we need to be making.  All in good time.  All in good time.

It’s currently 20 degrees in Bloomington.  Winter, supposedly, is a good two weeks away yet.  But as my mother used to quote: “If winter comes, can spring be far behind?”  Can’t wait!  Winter is often thought of as a blah time of year, a “dead” season.  But I imagine Mother Nature will continue to keep herself busy.  That’s what mothers do.  They worry.  They fuss.  They certainly don’t sleep much!  More than anything else, they busy themselves with work.  So I wonder: will there be another Three Lakes Trail hike this winter where we can observe what Mother has been up to?  Branches draped in snow, creek frozen over, icicles dangling, maybe a brilliant sun making everything sparkle?  Sounds enchanting.  And the geese at the lake’s edge whose honks the other day told us in no uncertain terms that we were trespassing?  Will they have headed south to open waters and warmer days?  Maybe I’ll find out come January or February….

As I reflect on the changes wrought within one single season, in the course of a mere 65 days, I recall that, give or take a few days, that’s how long I’ll be in Spain.  My trek will begin rather early in the spring and it will end a few weeks before the official start of summer.  Is there any season that produces as many dramatic changes as spring?  Of course, I won’t be walking and comparing the same 11-mile stretch of ground.  Nevertheless, as I make my way west across northern Spain, nature will be working her spring magic and I’ll be all eyes to take in the thawing, greening, and rebirth that characterize the months of April and May.  I’m hoping that it’s not just the landscape that will be changing and experiencing growth and maturity during my pilgrimage days.  Walking the Camino changes the walker, I’ve been told.  I hope that’s true.  I hope I come alive and respond to the sun and the warmth and all the spiritual blessings the Camino offers to those who are open to them.