“On the road again…” 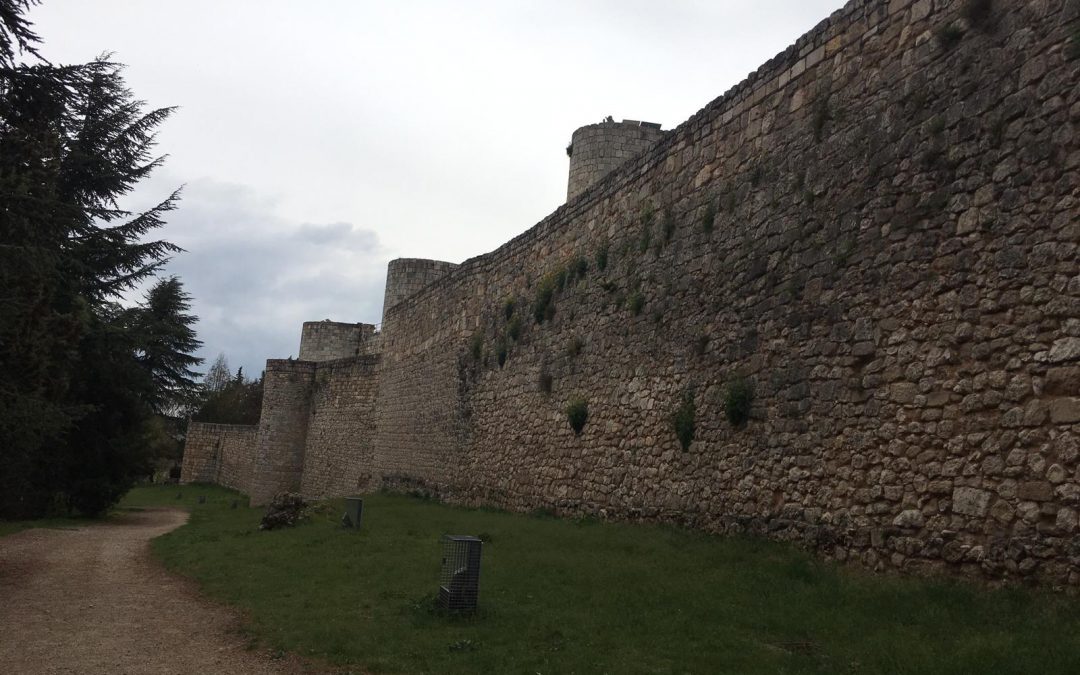 So one of the last pieces of business last night was the nodding and smiling to Nadine about possibly setting out from Burgos together about 8:00 am. If it worked out… I wasn’t thrilled about it, truth be told; trying to call up my French–either to speak it or to listen to it–is challenging. Still, it wasn’t my intention to avoid her. However, by 7:20 I was packed, I had brought Ginny’s backpack to the bar to await the vehicle that would carry it forward two days, and I had delivered Ginny’s ice to her bedside. I was going to wait another 40 minutes for what? And so I left.

Ha! The morning’s jokes were on me. For one, I kept waiting for there to be a “better spot” to pick up some breakfast just a little bit further along, and thus… I missed my opportunities and had to face the prospect of walking six miles on an empty stomach. Not smart. By mile five I was stopping to shed my winter coat–a brilliant blue sky was giving the sun the chance to do its warming tricks–and to dig out the second of the three energy/protein bars I had brought from the US. The other joke on me was addressing another solo walker as we came to the far end of Burgos and starting a conversation with her. Oh, no! Back to French again! This woman apologized for her lack of English and lamented the state of English instruction in France. “We should be ashamed of ourselves,” she went on, in French, of course! “The Germans. They all speak English [editor’s note: no they don’t!]. From Norway, Denmark, all over. But the French? We are disasters!” We must have walked together for an hour and a half or so, but then we met up with Leko from Japan and before I knew it, Leko and I had taken a lead on my new French friend.

Breakfast in Tardajos was very welcome. Tortilla española, café con leche, orange juice. Ready to move on. Ah, but here comes my French friend from the morning walk, who sits and joins me, having first checked out the little town a bit. And then, miracle of miracles, here comes the lonely Nadine from last night! Here’s my chance to get these two women connected with one another so they can chat without effort to their hearts’ delight. And I’m off the hook.

But here’s the thing: it’s now my turn to tour the little town a bit. I was admiring the outside of the village church (there’s no curing me!) and in the process met up with a family (2 adults, 2 kids) who were admiring the stork’s nest on top of the bell tower. The kids thought it was cool. The family interested me; very definitely not Spanish. I was curious. “Move back about 20 paces,” I suggested to them in Spanish, ” and you’ll see the stork.” And then: “¿De dónde son Uds?” “De Madrid.” Nah, can’t be. “Well, we came from Ecuador, but years ago. The children are españoles.” Ah. The wife knew nothing about the Camino, the husband a little, so I provided some information and left behind a family who were saying that they should consider taking on the Camino when the kids were a little older. But you know what? In the course of my conversation with them, and also a bit further down the road when I had occasion to be speaking in Spanish, I found myself saying things like “oui” and “très bien”! Oh, my! Mon dieu, mon dieu!

Lunch and the meseta

Three or four hours down the road I found myself on the outskirts of my proposed destination for the day. It was 1:30, dreadfully early for me to want to stop. And I felt good. I was walking with Yolanda and Ruth, aunt and niece from Madrid. They had reservations for Hontanas, another 10 kilometers down the road. Hmmm. The wheels start churning… Hmmm. I could do that. It would be about 20 kilometers, longer than I’ve ever walked, but… I could do that. And I’d have my inaugural view of the “meseta.” Ruth offered to dial the albergue where she and her aunt were staying and make a reservation for me. Said and done.

I saw the Spanish gals ducking into a tiny store and, though at first I passed it by, upon recalling that I had missed the breakfast hour by passing up opportunities, I decided I shouldn’t do the same for lunch. Did an about face. For under $4 I walked out with a nice chunk of peasant bread, five slices of some kind of cold cuts, a wedge of hard goat cheese, an orange, a tomato, and a yogurt (can I still count the yogurt even though at some point it fell out of my backpack? I hope there is another pilgrim somewhere writing home about “how the Camino provides”!)

Ah! The “meseta.” Loved my intro to it as I climbed up to the “dry” high plain (so just why were there puddles on the trail?) Definitely lends itself to introspection and contemplation and many stops to just turn around and take in the full view, all 360. And to watch the waving grass, listen to the strong wind as it passes through. A tail wind! the best kind, no? Wondering: is this planted? Not a farm house in sight. Not a piece of farm equipment in sight. No flocks of sheep, no grazing cattle. On and on and on. I kept thinking I should take a photo of a tree since it might be the last one for 150 miles. Barren and lonely, but yet not that at all. Distant vistas… maybe 30 miles away? More? I took a lot of videos and some photos. The former, I’m afraid, will never load on the kind of Wifi I’m encountering; the latter, maybe you’ll see if I can ever find the kind of time I need to send them on their way. Or: come do this part of the Camino yourself. Not flat exactly–according to Fitbit I climbed 128 floors on this stretch–but not as rocky or as challenging as other sections. And at some point, it was time to sit by the side of the road (a gravel one, one car in two hours at the most) and, back to the Camino, meseta spread ahead of me, have a picnic with the crunchy bread, the meat, and the cheese. Lovely! Delicious!

More special sights or thoughts on this full, long day

Home for the night

It was a long haul to Hontanas towards the end. I’ve been used to seeing villages from quite a distance and being certain that I was heading towards them. In the case of Hontanas, no clues as to its whereabouts. No visible church towers calling out to me. Just the vast expanse of plain. Finally, ahead, I saw a huge hill looming in the distance, a reddish gravel road cutting through the middle of it. Oh, no! Yet another distance to cover before the town? And then, a few more steps, I crested the smaller hill I’d been heading up and saw, just down at the bottom of the hill, quite close to me: Hontanas at last! I could celebrate the longest walk (to date) of my life, at just under 20 miles.

I’m a big one for exploring a town before I settle in to the chores of clothes washing, showering, checking out dinner options, catching up on electronics. A fan of it, but it’s not often the way I proceed. But this day, yes! My albergue was at the entrance of the town. I located my bunk, spread out my sleeping bag liner and night clothes, and headed out to “see the town.”

You do understand, don’t you, that the towns, the pueblos we are passing through, are very tiny? They pretty much exist because of the pilgrims. In my guidebook, Hontanas is listed as having a population of 70! I’d wager that most of the 70 are at the service of the one-night visits of the pilgrims. It was a joy to run into Kelly from California and a couple from Germany; I would have imagined them several days ahead of us, but… for one reason or another, many pilgrims get delayed along the way, with injuries or just the occasional day off for R & R. My walk through town took me past a restaurant whose evening menu was very inviting. I entered to see if the meal was only available to those spending the night in the establishment and learned that it was open to all. I was given a 7:15 arrival time at a table, I later learned, that I would share with 7 or 8 folks from California who are doing the Camino on a bigger budget than my own.

As I continued along the central street of the town, lined with outdoor tables and chairs and loud chatter from Camino walkers who were thrilled with that still-bright sun, the church bells began to peal as the natives gathered. I learned that there was a 6:00 pm Easter Vigil service, not really suiting me with my 7:15 dinner reservation and my still-dirty body. I talked to some of the locals as they were entering the church and asked if there was a service in the morning (“no”) or if they knew if I would find a late morning or early service in Castrojeriz, the town I would reach the next day. I was informed that there was a 1:00 pm mass there in the Iglesia de San Juan. Perfect! I had only 10 kilometers to walk in the morning. Piece of cake!

Back to my albergue to wash and hang up some clothes, shower, and head back up the main street to dinner. If you must know: a salad with greens, beets, strawberry, and warm grilled goat cheese for first course; vegetable curry for the second; strawberry and apple cobbler topped with chocolate for desert. 10 euros. Most of the Californians were either 1) beat from the day’s walk or 2) intent on catching up on emails. Nelson, though–or was it Henrick, Henry…. or….?–apparently has a reputation for never shutting up. He did nothing to make me feel otherwise and… by 9:15 I was more than ready to return to the albergue, collect my clothes from the outdoor line up beyond the parking lot where half an hour earlier it had caught the last rays of the sun, and make my way to room 10. I found my five bunk mates already in bed, three apparently asleep and two just about ready to turn their lights off. All of which explains why I didn’t write this post last night but rather put the lights out and settled down into my silk sleeping bag liner, my winter coat spread atop me as a blanket, and waited for sleep to come. (Don’t let me get too much of your sympathy: it was a pretty comfortable temperature in the room.)

Thus ended a typical night of a typical pilgrim. If different from other nights, it was because… at the break of dawn we could proclaim: “Resucitó.” “He is risen.”

I’ll hope to be updating photos soon on Instagram/Facebook (Katy’s Camino). It just seems to be problematic to get them on this blog with what is often a weak internet signal…..