My road to Emmaus 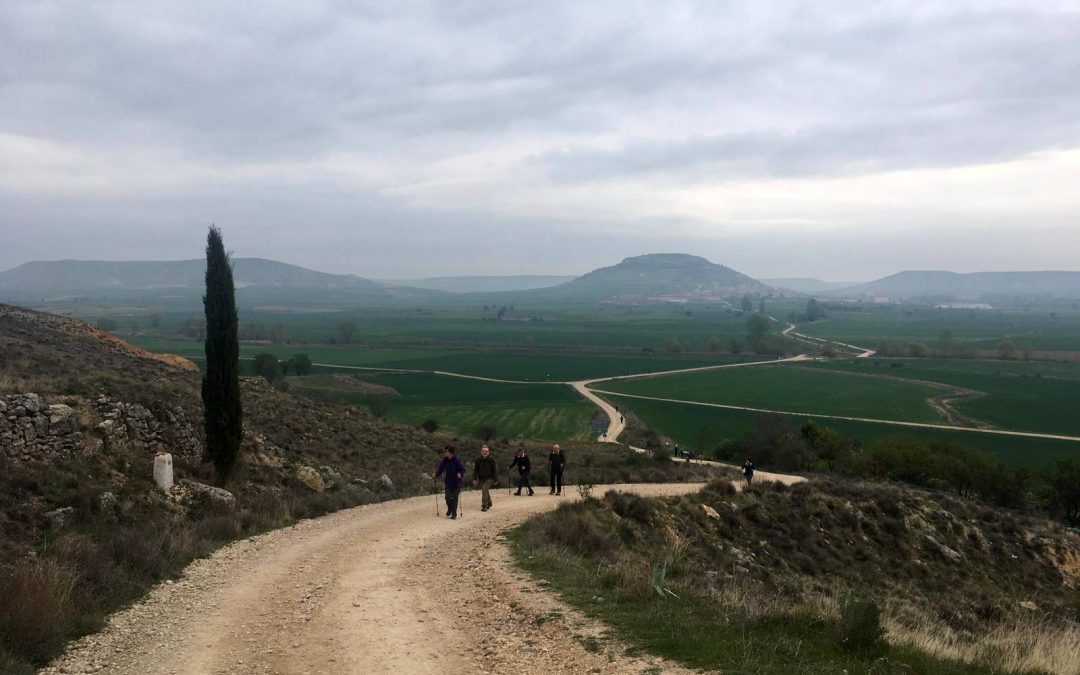 (Note: I have not yet posted Day 15 [Easter, April 21]. I didn’t have time to do justice to two days this evening, and so I decided to capture this day while it was fresh. Stay tuned for the Easter report. )

Ok, health and progress updates complete, I can’t wait to tell you about my walk to Emmaus!

That’s what I told Ginny when I left Castrojeriz this morning, that I was looking forward to walking alone again today. There was lots of chatter at the long table at the breakfast buffet (corn flakes; packaged muffins which I heated in the microwave and the hostess acted like I had invented something brilliant; “would never have occurred to me,” she said; “I haven’t seen anyone else do that.” Huh? Surely I’m not the only one who prefers warm anything to room temperature!; biscuits to dip in the café con leche; orange juice). Yes, a lively group discussing which town each was walking to, which albergue they hoped to stay at, which we should avoid, etc., etc. I thought I was ready for some silence. I told Ginny of the few people for who my prayers were going to be directed.

And then…. then I started meeting people. Talking. Listening. Sharing the beautiful views together. I met:

You remember, don’t you. The two disciples walking along, so distraught over Jesus’ death a few days earlier, so uncertain as to how to continue, thrown completely off course. And then this stranger, walking along the same roads, meets up with them and a conversation ensues. “And they recognized him [Jesus, the resurrected Jesus] in the breaking of the bread.”

So, from early on today, prompted, no doubt because it was, after all, the day after Easter, I found myself thinking of the road I was on as symbolic, as a road to Emmaus, where the strangers I was linking up with were somehow helping me interpret life. I had decided, almost from the get-go, that my post would have Emmaus in the title.

And the funny thing is, I had parted company with Jesús for well over an hour when it occurred to me to really take note of the fact that I had run into JESUS on my road to Emmaus! (I’m slow!). That realization tickled me.

Let me tell you what happened maybe fifteen minutes before my encounter with Jesús; this is appropriate for an Emmaus walk as well. I’m heading along on the near treeless meseta when I see a little copse on a little hillside. Cozy, refreshing, cool, easy to access… plus a good possibility to find cover and privacy for… well, you know what for! I climbed the rise, hung my backpack from a tree branch, took off my shoes and socks to apply more vaseline, and settled in to watch the pilgrims trudging up the path. When what do I hear? A long, loud, distant carcajada, a belly-deep …. “laugh” doesn’t really get the meaning across, but it’s the best I can do. What the heck? I look across to a distant hill, a kind of pyramid jutting up off the plain. It is not close to the trail, but atop it, unmistakable, is a pilgrim. Or a statue? A statue with a built-in speaker set to go off at intervals? All was still. No sound, no movement. Some other pilgrims coming up the trail stopped and looked. “It’s not moving”; their assessment concurred with mine. The form was stiff. Surely a wrought iron statue. All was quiet again. And then, another roar of a long carcajada, a slight movement. Arms rising to the sky, and holding.

I was fascinated. I watched him for at least 15 minutes, during which time there were several bursts of long-held laughter and a number of different body positions. Twenty minutes or so later, I noticed the lone pilgrim “merging” onto the trail again, maybe forty feet or so beyond where I was sitting.

So, folks, I figure there are several ways of interpreting this, and who’s going to say which one is the correct one? Was he laughing at how this world is just a thing of folly, signifying nothing? Laughing so as not to cry? Releasing something from down deep? And if a release, one that was very healing, joyful, reflecting some bit of self-discovery that had been long in coming? As I thought about it a good bit of the afternoon, I liked the version in which this was an enormous expression of Easter joy. The laugh was at Death and Meaninglessness of Life, all defeated when Jesus rose on Easter morn. The last laugh was not death’s, after all, but ours. Hey, it works for me. Emmaus! He lives!

As Jesús and I were leaving the bar, a tall young man with long hair and–I think!–a beard, huge pack on his back, entered the bar. Jesús, to whom I had talked about my “Emmaus day,” kidded: “Why, there’s your Jesus.” I wondered if there was any way that this might actually have been the “laugher on the mountaintop” (wasn’t that where Jesus liked to go to pray, to get away from people?). I was alone again on the trail and I walked slowly when I noticed that this tall, mysterious stranger was a ways behind me. When finally he caught up I asked him if perhaps he had been up on a high promontory earlier in the afternoon, laughing. “Not me,” he replied in English that was good but not native. “I’m just an ordinary person, trying to find my way in life.” He didn’t care to elaborate and I let him pass on without pressing him further. “An ordinary person, trying to find my way in life.” Aren’t we all?

And then there were these scenes

Emmaus? Frómista? Bloomington? Chicago? Wherever you are, get out for a walk and see who or what you encounter on your road! 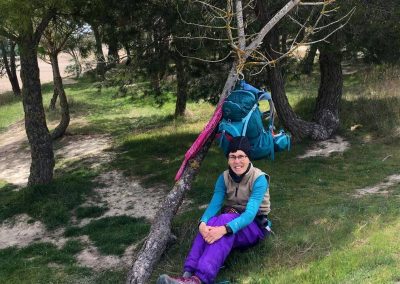 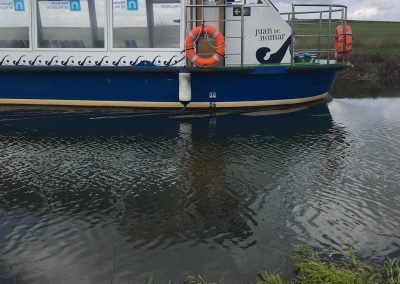 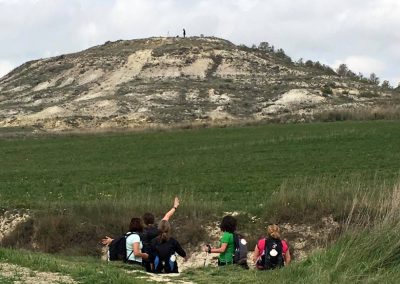 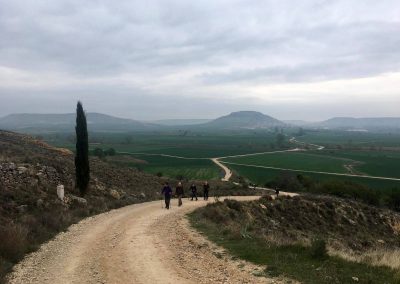 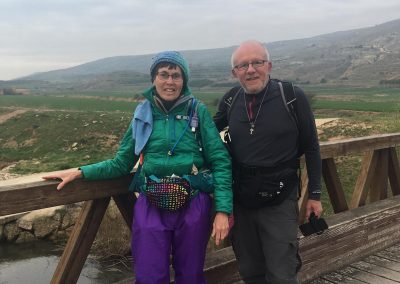 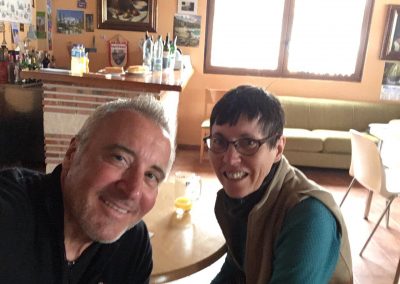 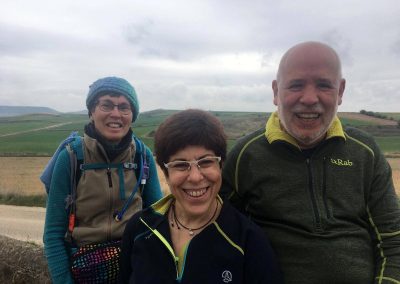 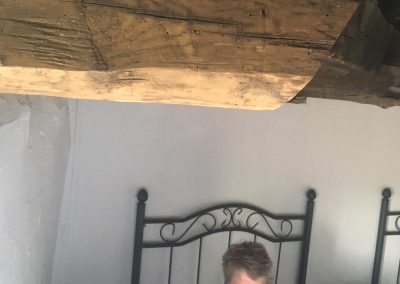 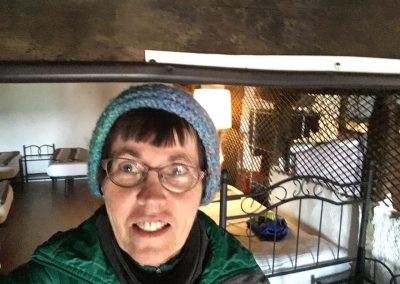 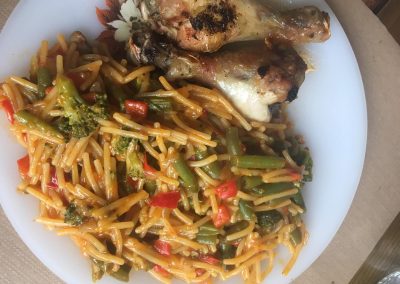 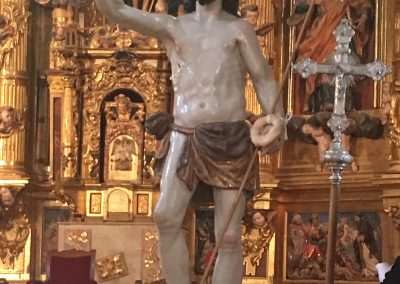 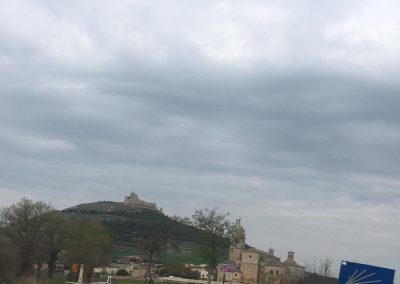