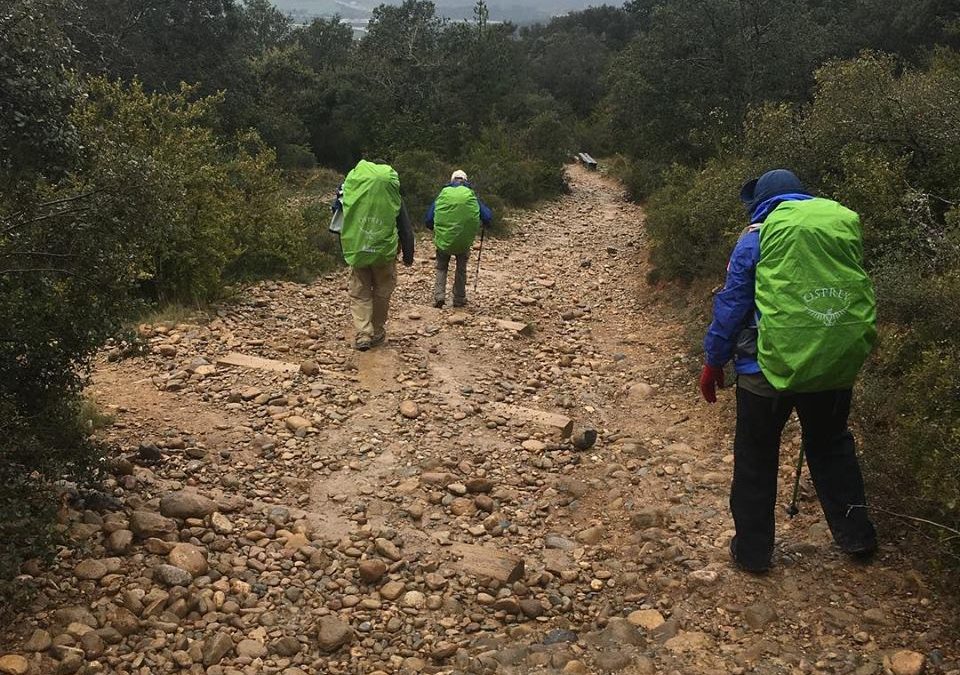 Trying something a bit different: sitting on a park bench to at least begin this description of today’s journey. Beginning to write at 6:00 pm rather than at 10:00! Awkward because

4. I need to head back to the hostel soon to get my clothes off the line and my shoes back inside before the dew gets to them. Hmmm…. might not get too far with this post. Or better yet, might have to make it a really short one.

The short of it

A fabulous day by any standards! Laughter, joy, the comfort of having simple needs and meeting them simply. Ginny and I chose the “alternate route” which promised–and delivered–stupendous views of the medieval town of Monjardín, a castle in ruins, foothills and, in the distance, mountains and windmills.  In addition, the “alternate route” gave us absolute solitude as we walked part way up and around Montejurra.

Our route reconnected with the main route a little beyond half way to our destination, but still we mostly had the trail to ourselves all the way into town. We found “room at the inn” (at the municipal hostel; at 6 euros/bed, our most economical night yet), where the water was hot, the clothesline had space, and Ginny got the bed closest to an outlet for her C-Pap.

PS because you’ll be wondering: Barb checked in a few hours ago, having reached Viana. She has gained about 18 km on us by my very rough calculations.

That was pretty short and sweet, right?

About that “road less traveled”…. It really did make “all the difference”!

This is unorthodox: now I’m sitting in church awaiting the start of the pilgrim mass. The locals–mostly women, but a few gents as well, have just finished reciting the rosary aloud and are now responding to a litany invoking name after name after nickname for Mary. I feel like I have stepped back in time about 60 years. I believe I’m in a 12th-century church that has been renovated through the centuries and in its current state is extremely ornate, dripping in gold. I miss the simple Romanesque church from yesterday….

But I’ve digressed, haven’t I? You wanted some details of how we made it through the day.

Off to a slow start in terms of loading our packs and setting off. It was Ginny’s turn to be doing everything out of sequence, feeling “discombobulated,” shall we say, then needing to start dressing or working on feet or loading the pack or whatever from scratch. Finally we stepped out of the hostel overseen by the Capuchins (though to my knowledge we didn’t see any friars). 8:00 am or thereabouts. We made it… about two blocks before getting the sense that we were heading out of town and if we wanted to have a bit of breakfast and pick up supplies for lunch, we had better return to the convenience store/gas station that we had snubbed just a minute earlier.

That was our first great decision of a day with many of them. For less than 3.5 euros each we had cappuccinos served in ceramic cups with saucers, pastries (another china plate), plus we bought our lunch: half a loaf of “Italian” bread, a package of cheese, and a package of salami. The bread I stuck inside my jacket, the meat and cheese in my pack, and, now fortified, we headed towards the much-photographed fuente de vino (wine fountain) at the Bodega Irache where a turn of the handle on the outer wall of the bodega allows wine to flow into whatever receptacle a pilgrim chooses to hold under it! The clock had yet to strike 9:00 am, and we had some 13 miles to go, but we unhooked Ginny’s “pilgrim shell” from her pack and each had a “shellful” of vino tinto.

The second great decision of the day was to take the alternate option for the first half of the trek. We found ourselves alone and in a delightful woodland. It was a pretty simultaneous decision that this was the perfect trail portion on which to maintain silence, soak up our surroundings, and “do Camino right.” You will know what I am talking about if you have read my blog page called “About Katy” or the post called “Why?” It was a time for calling to mind family, yes (I do that regularly anyway), but also friends: neighbors, friends from various hiking groups, book group members, BFFs, those who have asked for special prayers, former Camino walkers who have encouraged me and given me advice for the journey, and for all who might be reading portions of these posts and/or checking photos. So, while calling to mind all of these folks/you folks, and asking for blessings for you and your families and biggest concerns, I covered a lot of “territory.” And gorgeous it was. I felt so absolutely blessed to be in the midst of so much beauty. Not Shanghri-la, and yet exotic in its own way. The play of the clouds over distant mountains, over ruins of an old castle, over a medieval town way off in the distance…. We passed vineyards awaiting warmer, sunnier days, fields planted with some sort of grain, many intersection of gravel-like roads and other trails for we were, after all, skirting a mountain that must welcome hikers of all sorts. But today it was ours. At one point I spotted two pilgrims perhaps the distance of a couple of blocks ahead of us. No one caught up with us or was ever visible behind during any of the many times we looked back to see where we had come from. Quite the vistas! Photos, at least those taken by me, won’t begin to do it justice.

We finally reconnected with the main route, though we were surprised to see so few people on it. Were we that far behind? It must have been approaching 1:00 and our morning croissants were no longer fueling our bodies. An enterprising person had set up what I’ll generously call a “food truck” in an open spot where the trail turns and a gravel road comes in. I suppose the property on which the truck was parked and where tables were set up, including a couple of tables sheltered from the elements by a roof and three walls, belonged to the gent manning the counter. He saw me approach and then look behind the truck. “No,” he tells me, “no bathrooms.” I look behind him to the tall stacks of bailed hay. Very private, thinks I. “No,” he tells me, “not there either.” Finally, looking none too pleased, he indicated some low bushes down the trail in the direction from which we had come. “Maybe there.” (Somewhere beyond his property, right? And, really, can I blame him?

Anyway, to the bushes we went and then, our bladders content, we wisely decided that this vendor wouldn’t be happy if we pulled out our bread, cheese, and salami and ate them at his tables, even though we bought a banana (me) and some fresh orange juice (Ginny) from him. Thus we made the third good decision of the day: we continued on and searched for a spot along the trail that looked flat enough, dry enough, and rock-free enough. As fate would have it, it was sprinkling lightly by then, but…–and this, for me, is the fun part–it gave me an excuse to dig out the “rain kilt” I’d ordered from China for under $10 (plus shipping), the one some of you heard me talking about because it took two months to arrive. We spread it out and had it as a picnic blanket while we dined, our shoes/boots off, and toes and heels inspected and treated as necessary. The rain picked up a bit, but nothing serious. The bread, which we had seen the bread truck deliver to the convenience store five hours earlier and which had stayed nice and warm inside Ginny’s jacket, was delicious! (Yes, I did say that I put it in my jacket. Yes, it did fall out through my rain jacket and drop to the ground, so I was relieved of my warming oven duties….)

Fourth good decision of the day: testing out the phrase “The Camino will provide” by not making reservations ahead of time and heading directly to the municipal hostel (always the cheapest) though not always–or even usually–the one with the best services. We don’t want to get spoiled, and we were craving the “basic experience.” Fortunately, we were not, after all, the last to arrive and we did find beds. We are in a “cubby” with 8 bunks, 7 of them full. Luckily on bottom bunks. Nothing fancy. No outlets or individual lights for each bunk, no lockers for valuables. But very adequate. Nice courtyards in which to hang our clothes to dry. Nice hospitaleros (a couple from Belgium, the male being more hospitable than the female, but inside her I see a good heart).

Photos? I haven’t even seen them myself. Hopefully I’ll get some up tomorrow, though we may be facing a long day. We’ll see. This day, however, is officially over. Night all! 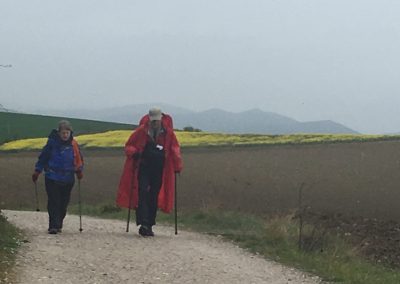 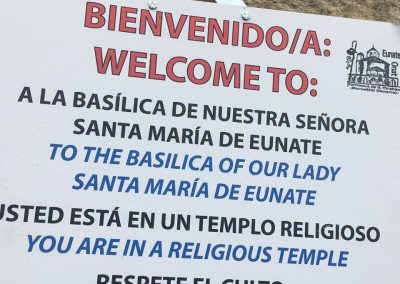 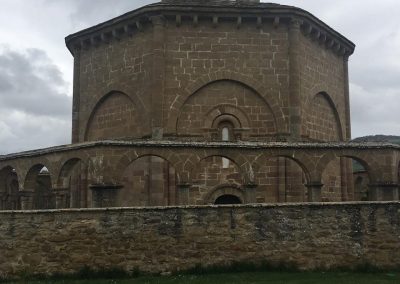 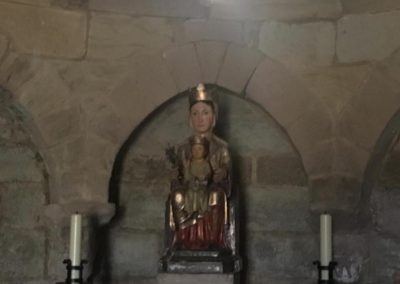 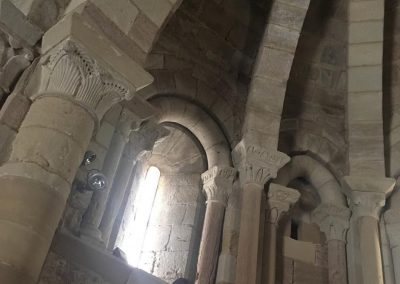 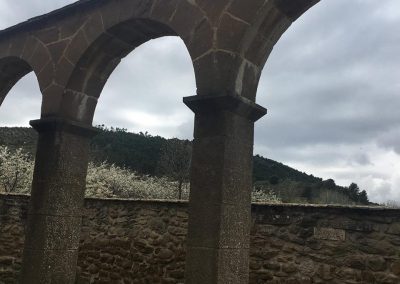 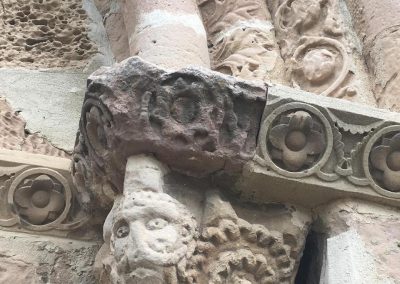 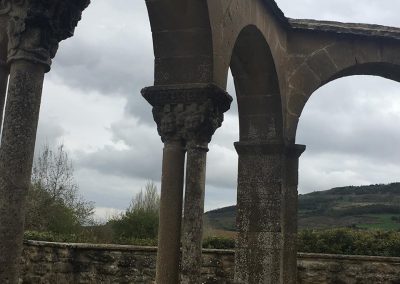 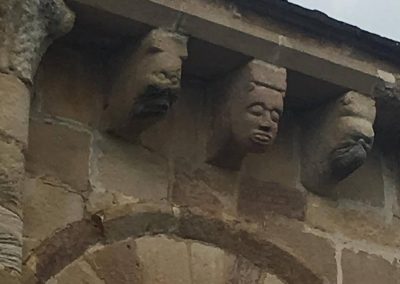 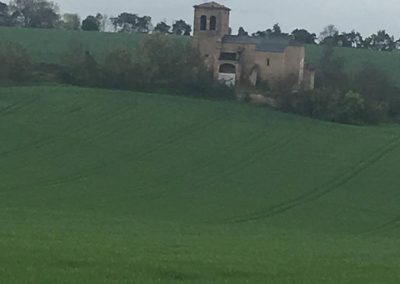 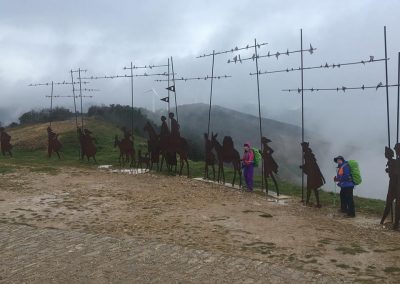 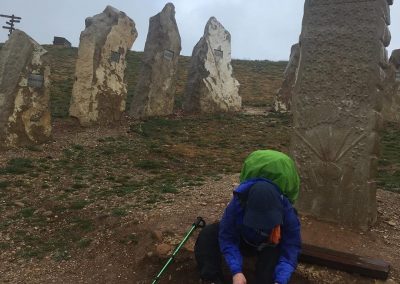